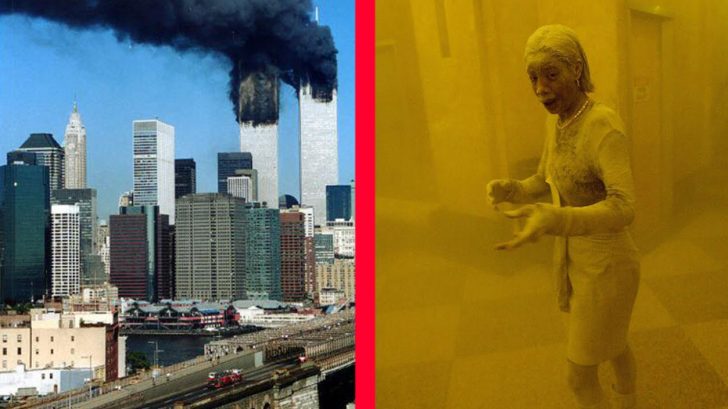 19 years ago, 2,977 people were lost and over 6,000 people injured. 343 FDNY Firefighters, 23 NYPD Officers, 37 PAPD Officers, 8 Emergency Paramedics all gave their lives running into two collapsing skyscrapers to help others.

September 11, 2001, is a day that America will never forget. Through the midst of the pain and tragedy, we see stories of strength and heroism. One person who stands out is a woman by the name of Marcy Borders.

At 28-years-old, Borders had just started working at Bank of America on the 81st floor of the World Trade Center as a clerical assistant. At 8:46am, Al-Qaida hijackers slammed American Airlines flight 11 into the tower. It hit between the 93rd and 99th floors, just 12 stories above where Borders was working. In that moment, her life was forever changed.

Borders scrambled down the main staircase of the north tower, which was packed with hundreds of people trying to escape. It is estimated that it took her about an hour to reach the bottom of the building. By the time she found her way to the exit, the south tower had been hit by the second plane and had just collapsed, at 9:59am.

Photographer Stan Honda was in Lower Manhattan, taking pictures of the scene. He ducked into a building lobby, when “a woman came in completely covered in gray dust. You could tell she was nicely dressed for work and for a second she stood in the lobby. I took one shot of her before the police officer started to direct people up a set of stairs, thinking it would be safer off the ground level.”

The woman Honda had snapped a photo of was Marcy Borders. The haunting photo became one of the most iconic images of the worst day in American history. The image — and Borders — became known as “Dust Lady.”

Borders became severely depressed and developed a drug addiction in the years following the attack. After going through rehab and finally hearing about the death of 9/11 mastermind Osama bin Laden, she began to find peace. But then sickness struck. Borders received a diagnosis of stomach cancer in August 2014.

At the time shortly following the attack, many were unaware the dust caused by the towers collapsing was highly cancerous. 14 years later it had finally caught up to Borders. However, this woman continued to show incredible bravery and courage in the midst of yet another trial. She told her local paper, the Jersey Journal, “I try to take myself from being a victim to being a survivor now. I don’t want to be a victim anymore.”

Hey Faces, Please keep my Family the Borders Family in prayer for We lost our very own hero Marcy Borders .May God Comfort .us in our time of sorrow. My emotions are all over the place right now. 💔.💔💔💔💔💔😢

Marcy Borders died in 2015 at the age of 42. Following her death, her daughter Noelle Borders to the New York Post, “My mom fought an amazing battle. Not only is she the ‘Dust Lady’ but she is my hero and she will forever live through me.”

Watch the video below to see the President’s address to the nation at the 9/11 memorial ceremony.