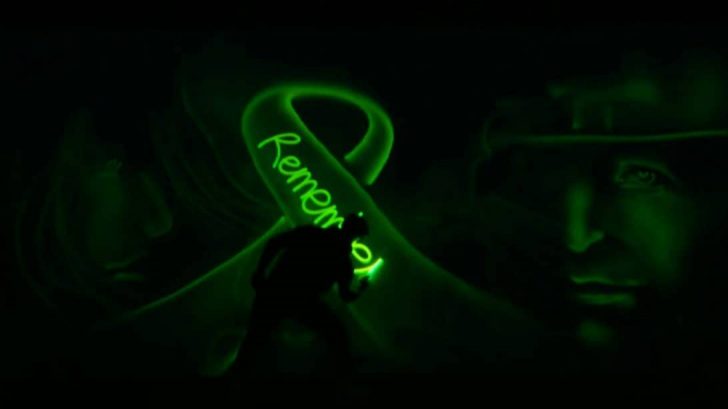 Did you know that it’s possible to paint works of art using nothing but light? This is accomplished using a technique called “light painting,” and it’s spectacular to see.

You may have already witnessed a light painter at work and have never realized it. Tim McGraw‘s well-viewed lyric video for his single “Neon Church” features the work of a light painter named Patrick Rochon, and it’s stunning.

“He’s an artist who uses light as paint and darkness as a canvas,” McGraw said of Rochon in a tweet about the lyric video. “That couldn’t be more perfect for #NeonChurch.”

Another light painter whose name you may recognize is Alex Dowis. That’s because the Czechoslovakian visual artist was one of the standout stars of the 2019 season of America’s Got Talent.

The judges were always amazed by Dowis’ performances, but they were left in absolute awe of the artwork he created on the September 10 semifinal episode.

As you know all too well, September 10 is the day before the anniversary of the 9/11 attacks in the U.S. With that in mind, Dowis chose to create a work of art honoring the heroes who jumped into action that day.

Dowis’ performance recognized the first responders to 9/11. It opened with audio clips from the day of the attacks, and Dowis began painting images of the firefighters and paramedics who responded to the scene.

He then painted the image of a paramedic attempting to revive a woman whose heart had stopped. In an emotional moment, Dowis paints an angel who places her healing hands on the woman and helps bring her back to life.

The end scene that Dowis paints shows the face of a firefighter and a giant ribbon that reads “Remember.” By the time he wrote his signature at the end of the performance, Dowis had the entire crowd on its feet.

You can watch Dowis’ powerful tribute to first responders by tuning in to the clip below. Be prepared to shed a tear or two.