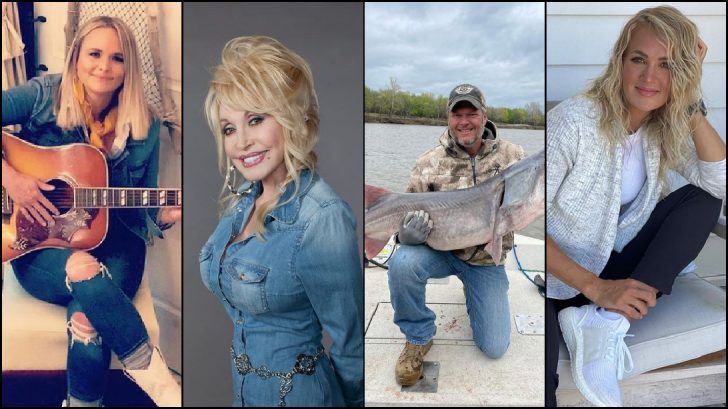 Being a celebrity doesn’t make one exempt from fears. In that regard, some of country music’s biggest stars are just like us. Phobias are very real and everyone has their own, but we found seven country singers who have somewhat unusual fears. This list goes beyond fear of heights, spiders or falling, and goes into a unique realm of phobias. Check out our list below.

Long before Blake Shelton was named People‘s Sexiest Man Alive, he appeared on the magazine’s annual list and was asked about his greatest fear. The name of that fear is almost as frightening as the fear itself. Blake revealed that he has thalassophobia…a loosely defined fear of the sea, or fear of not knowing what’s in the sea.

“My biggest fear is being in water that’s clear but so deep that when I look down, it’s dark, and I can see my feet dangling,” Blake said. “I’m convinced there’s something that’s going to attack me, like a giant catfish or turtle.”

The fear makes sense since Blake is an Oklahoma native and didn’t grow up near the ocean.

The American Idol alum arguably has one of the strangest phobias on this list. In an appearance on the Drew Barrymore Show in January 2021, Underwood revealed that she has a fear of sea turtles.

“I feel like out of all the animals on the planet they’re the ones that have bit me the most,” Carrie explained. “I grew up in the country and turtles were the easiest things to catch. They are slow.”

Carrie went on to add that she’s been bitten by lots of turtles and “it does not feel good.”

The Man in Black had several fears including a fear of snakes. But, despite having served in the U.S. Air Force, Cash’s most debilitating fear was of flying. Because of his flying phobia, Johnny traveled by bus or car when on tour rather than by air. During his first two years on tour, the singer reportedly racked up over 100,000 miles.

The “House That Built Me” singer has a very relatable fear of New York City subways. Lambert met and married her husband, New York City native Brendan McLoughlin, she had to learn her way around the Big Apple and face her fear of the subway. Less than a year after her marriage, she told New York’s Country 94.7 that her fear is less about the ride and more about getting lost.

“I don’t know how to navigate [the subway],” Lambert said. “I’m scared of the stops. I know I won’t pay attention — I’m ADD — so I’ll be daydreaming and miss my place to get out.”

In 2017, the American Idol judge appeared on Ellen where he competed against Saved by the Bell star Mario Lopez in a game of “You Bet Your Wife.” During the game, Bryan and Lopez were suspended from the ceiling as Ellen and Lopez’s wife bet against each other about naming things from specific subjects, hoping their partners know something about the category. Failure to name the correct number of items resulted in the men being dropped to the floor.

In one round, Luke had to name things people are afraid of and he listed “alpacas.” When Ellen asked Luke why he’s afraid of alpacas he responded, “They’re just weird.” Can’t argue with that!

In addition to a fear of flying, Dolly Parton is scared to death of roller coasters. In a 2016 interview with USA Today, the “Jolene” singer recalled an incident at Disneyland when she was “never more scared.” At the request of her niece, Dolly accompanied her on the iconic Disneyland roller coaster, Space Mountain.

“I didn’t want to ride, but I did it just for her. I almost threw her out! I was so scared, I couldn’t even hold on to her. I thought, ‘Oh Lord, if you just let me make it through this, I’ll never get on another coaster’,” Dolly said.

She added that she had a good reason for hating roller coasters.

“I’ve got too much to lose — like my hair! Lord knows what else could fall out of me. I can think of a lot of other things I’d rather do than be scared to death [on a coaster].”

One half of the most successful duo in country music history, Brooks & Dunn, had a serious fear of going solo after spending more than 20 years of his career with a stage partner. Ronnie Dunn told Billboard in 2011 that he was going into his solo career “scared to death.”

“I think fear and insecurity are great motivators,” Dunn told Billboard.com. “I worked overtime — not that I have to — to stay neurotic. I never take anything for granted. I look at my age. I look at the length of time that we were in the marketplace with Brooks & Dunn, and I don’t know how people are going to accept me and I don’t assume in any way they’re gonna come running to this project.”

But, the fear was unfounded as his self-titled solo project’s first single, “Bleed Red,” landed in the top 10 of the Billboard Hot Country Songs chart.