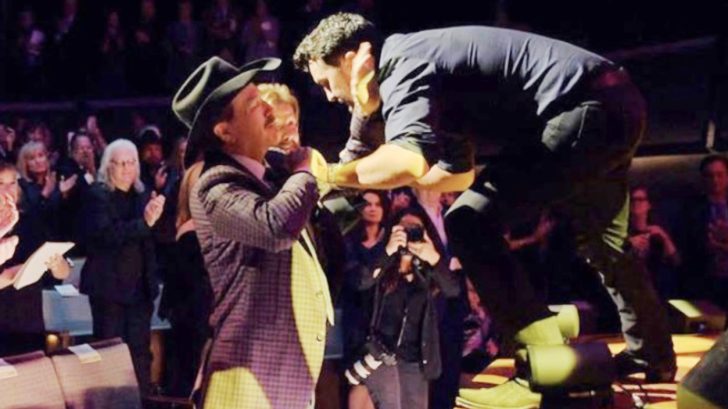 He documented the momentous experience, which he had dreamed of since he was a young boy, in a webisode that was posted to his YouTube channel several months later. He called the night “a damn dream come true.”

Along with country music fans, Luke’s sister Kelly arranged for 129 people – almost their entire hometown of Leesburg, Georgia – to watch his Opry debut. Sadly, just a few days after returning home, Kelly passed away from unknown reasons. According to ABC News, the cause of her death “remains undetermined.”

This tragedy comes years after their brother Chris died in a car accident right before Luke was supposed to first move to Nashville to pursue country music. Instead, he stayed home to be near his family. The Bryan family went through that heartache privately, but Luke was a rising star when his sister passed away.

On Sunday (October 20), Luke was at the Country Music Hall of Fame medallion ceremony to honor Brooks & Dunn, one of the three inductees. He performed their 2003 hit song “Red Dirt Road,” but before he did, he told a couple stories about Kix Brooks and Ronnie Dunn that have stayed with him for the past 12 years.

Posted by Country Music Hall of Fame and Museum on Monday, October 21, 2019

“Right when I started having some success, I had written a No. 1 and I lost my sister,” Luke told the audience. “My sister passed away. And I was out on my radio tour on a Southwest flight, probably on with the C [section] … I’m on the plane and I see a number on my phone that I don’t recognize.”

He continued, “I picked it up and it was Kix Brooks on the phone, just telling me he was sorry about our loss. I never will forget it. What an amazing gesture. I hung the phone up and called my whole family and we were just amazed at that gesture.”

Luke also talked about how Ronnie gave him advice a few years later on how to not lose his voice every night.

“That’s what country music is all about,” Luke continued. “It’s just what it’s all about. And I just can’t thank you guys enough for those moments. It’s an honor to be here.”

Watch the recap video of the medallion ceremony below.

At Sunday night's Medallion Ceremony, Jerry Bradley, Brooks & Dunn, and Ray Stevens became the newest members of the Country Music Hall of Fame, their accomplishments marked with help from an All-Star Band, a fittingly diverse lineup of guest performers, and a welcoming cast of fellow members. Look in on historic moments from the 2019 Medallion Ceremony at the Country Music Hall of Fame and Museum:

Posted by Country Music Hall of Fame and Museum on Monday, October 21, 2019