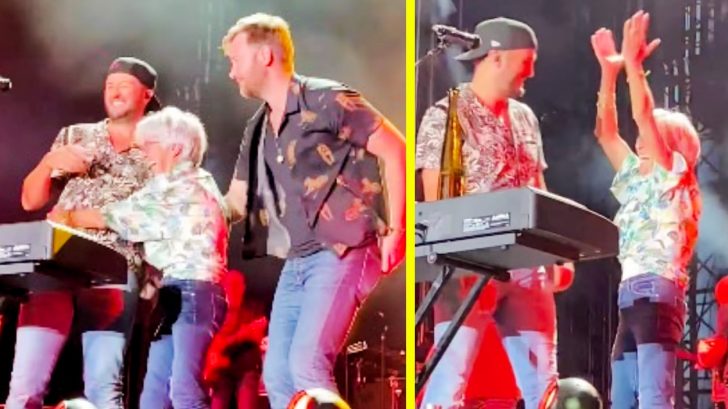 Over the course of just a few short years, Luke Bryan has managed to create one of the biggest country music festivals in the world. Called Crash My Playa, the festival takes place every winter in Mexico, and features performances from Luke and many of his famous friends.

In 2020, some of the Crash My Playa performers were Jason Aldean, Old Dominion, Scotty McCreery, and of course, Luke himself.

On January 25, the final night of the festival, Luke welcomed some of his pals on stage to entertain the crowd, including Jason and Lady A‘s Charles Kelley.

The trio was also joined by Luke’s mama, LeClaire, who always tags along for every Crash My Playa. And she has a good time while she’s there!

Luke, Jason, and Charles started singing “Take It Easy,” a song first released by the Eagles in 1972. It peaked at the 12th spot on the Billboard Hot 100, and became one of the group’s signature songs.

The track gained a country connection in 1993 when Travis Tritt recorded it for the Eagles tribute album, Common Thread: The Songs of the Eagles. His rendition was also a success, and claimed the 21st spot on the Hot Country Songs chart.

A song that popular certainly got the Crash My Playa crowd going when Luke, Jason, and Charles sang it! But the most entertaining part of their performance was LeClaire, who took command of the stage.

LeClaire, seemingly having the time of her life, started dancing with Charles, inspiring Luke to begin grooving as well. She then made her way to the front of the stage, where Jason wrapped his arm around her while he sang.

Everyone dispersed after a little while, and LeClaire remained up front with Luke. The two hugged it out for a bit before starting a dance of their own.

Their routine featured a few spins before Luke turned and dipped his mom, much to the delight of the crowd. She then tried to steal his hat and run away, causing him to remark, “You know, mama’s drunker than Lee Brice!”

Drunk or not, LeClaire was clearly having a blast.You can watch her dance with Luke while he, Jason, and Charles sing “Take It Easy” by tuning in to the video below.

There’s no doubt that LeClarie was the star of the show!