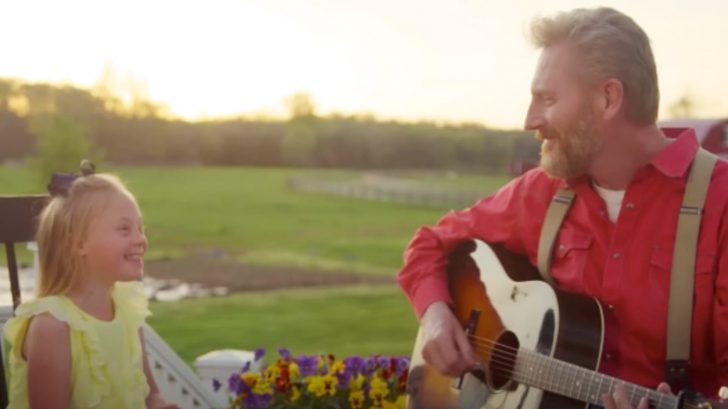 Rory Feek of Joey + Rory is a father of three daughters: Heidi, Hopie, and Indy. He shares Indy with his late wife and singing partner, Joey Feek. Heidi and Hopie are his daughters from a previous relationship, but Joey loved them as her own.

This Father’s Day, Rory and eight-year-old Indy got together to share a special song for all the dads out there. The song is called “Papa What If.”

Rory introduced the song on social media by sharing how excited Indy was to wish him a happy Father’s Day.

Rory further explained the backstory behind the song in a post on his blog. He said Indy came up to him last fall and said she’d like to sing a song with him:

“...which was a special thing for me to hear, because even though she has come out on stage with me at some point in almost every concert I’ve done (and every concert Joey and I did when she was just a baby), she’s never sang a real song with me on stage before.”

It didn’t take long for Rory to think of the perfect song. He remembered how much he’s always loved Shel Silverstein-penned tune “Daddy What If,” which was originally recorded by Bobby Bare and his son.

“I first heard it as an eight-year-old boy in Kansas riding through the endless fields of corn in my father’s old Buick and he and I would sing along with the radio when it came on,” Rory remembered.

Rory said he and Heidi used to sing “Daddy What If” during his shows when she was the same age Indy is now. So he thought it was time to teach the song to Indy too.

He made a slight change to the lyrics, substituting the word “Papa” for “Daddy,” since “Papa” is what Indy calls him:

“And so I taught to Indy…the same way I taught it to Heidi, which was by typing out the lyrics, and drawing pictures with crayons & markers of the parts she would sing… using the word Papa instead of Daddy, because that is what Indy calls me.“

Rory said Indy “was so proud of herself” for learning the song. She was performing it onstage with him by Christmas time. The father-daughter duo eventually recorded their rendition of the tune and also filmed a music video.

“In the early spring, we picked a pretty evening here at the farmhouse…we turned the song into a video and moment that we could treasure forever,” Rory said.

That video is the one he shared on Father’s Day, and you can watch it below. It will warm your heart to watch sweet Indy sing with her Papa.