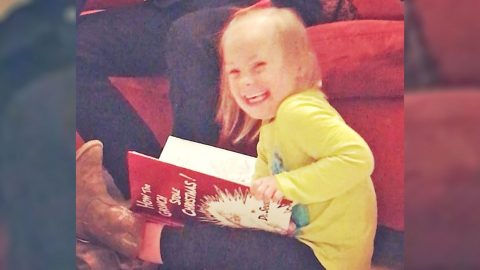 When Joey + Rory welcomed their daughter, Indiana, in February 2014, their fans fell head over heels in love with her.

That love grew with every photo and video that Joey + Rory shared of their Indy.

Not long after her birth, Joey + Rory learned that Indy has Down Syndrome. In addition to that, she was born with a hole in her heart that is in need of constant monitoring.

Despite all of the challenges Indy had to face, Joey + Rory were prepared to meet them. They began making plans for her care, and Joey had every intention to homeschool her.

But those plans changed when Joey was diagnosed with cancer. Instead of being able to teach her little girl how to walk, talk, and read, Joey could only lay in bed and treasure every second she spent in her daughter’s presence.

After Joey passed away in March 2016, Rory was left to raise Indy on his own, though he has had plenty of help from their eldest daughters, Heidi and Hopie. Thanks to them and Indy’s teachers at her former preschool, High Hopes, she has been growing and thriving.

By Christmas 2017, she could now walk and talk better than ever before.

For those who have followed Joey + Rory’s journey from the start, you know it wasn’t too long ago that Indy couldn’t even speak a single word. But now she’s quite the chatterbox, as shown in an adorable home video her sister Heidi shared in the midst of the 2017 holiday season.

The video shows Indy looking like a sweet country cutie in a pair of cowgirl boots, a red bow, and a bright green shirt with a snowman on it. In her hands she clutched a copy of Dr. Seuss’ classic Christmas story, How the Grinch Stole Christmas!

Indy began to “read” the book, though she of course wasn’t able to recite it as it was written. However, she made it clear that she knew who the author was, because she kept enthusiastically repeating Dr. Seuss’ name.

You could tell that Indy was quite proud of herself, because she turned around to face Heidi and shot her a big smile at one point. That smile is sure to thaw any frozen heart!

If you’re in need of a little light in your life today, all you need to do is watch the video of Indy below. She’s so precious!