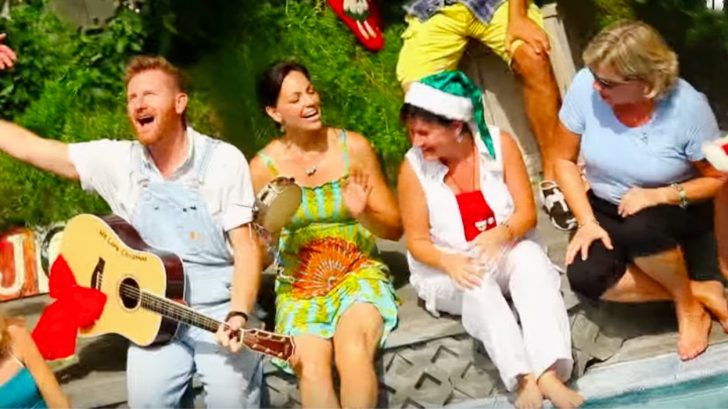 Dreaming Of A Warm Christmas

Whenever you think of the Christmas season, you likely think of snow on the ground, wearing warm sweaters, and snuggling up by the fire with a hot cup of cocoa. These images play out in some of the season’s most beloved Christmas carols, including “Let It Snow,” “Baby It’s Cold Outside,” and “Jingle Bells.”

Of course, not everyone can be found dreaming of a “White Christmas” when the holidays roll around. Some want nothing more than the chance to ditch the cold and snow in exchange for warm weather and sand between their toes.

Husband and wife duo Joey + Rory comically captured this sentiment in their original Christmas tune, “Let It Snow (Somewhere Else).” The track was co-written by the couple along with James T. Slater and Tim Johnson, and appeared on their 2011 holiday record A Farmhouse Christmas.

The album featured the perfect blend of Christmas classics and original tunes, including the heartwarming, “It’s Christmas Time.”

Of course, the duo couldn’t make a Christmas record without throwing a bit of comedy in there. After all, Rory did serve as one of the writers behind Blake Shelton‘s hysterical hit, “Some Beach.”

Rory revisited the beach again in “Let It Snow (Somewhere Else),” which has him and Joey singing about their desire to celebrate a warm, tropical Christmas. They sing of how they can “still sing ‘Jingle Bells‘” in the tropics, all while relaxing on the beach and sipping on mojitos.

The couple released a music video to accompany the tune, and watching it only enhances the song’s funny nature.

All Rory Got For Christmas Was A Real Bad Tan

One of the best moments comes when Rory strolls out on the beach wearing his signature pair of overalls. Not wanting him to get too hot, Joey helps him cut the legs off.

As you would expect, the outfit leaves Rory with an awful tan line by the end of the video.

Looks like he spent a little too much time in the sun!

This couple’s comedic twist on “Let It Snow” is something that everyone should take the time to enjoy. You can catch the official music video below.

Who else agrees with what Joey + Rory have to say in this song? Do you want to spend your Christmases somewhere warm? Or do you think the holiday season would feel all wrong without a little snow?