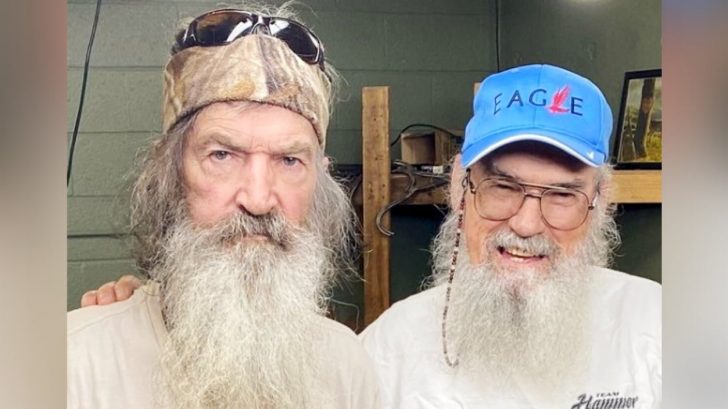 Si Robertson became famous as one of the main stars of the Duck Dynasty reality show. Known as “Uncle Si,” he is the younger brother of Duck Dynasty patriarch Phil Robertson (making him the uncle of Alan, Jase, Willie, and Jep Robertson).

Duck Dynasty fans loved watching Uncle Si on the show. He was known for his comical stories and outlandish one-liners. And of course, he could often be seen with a cup of tea in his hand.

Like the other Robertsons, Uncle Si is also known for sporting a long beard. Looking at him today, it’s hard to imagine Uncle Si without his signature facial hair.

Uncle Si and some of the Duck Commander guys are the hosts of a podcast called The Duck Call Room. During a recent episode, Uncle Si spoke about his high school sports career, and told a story about the best football game of his life.

It has been a well-known fact that Uncle Si’s older brother, Phil, was an accomplished athlete when he was younger. So Uncle Si wanted everyone to know that Phil wasn’t the only sports star in the family!

Taking to his Facebook page, Uncle Si shared an old photo of himself in high school. The photo shows Uncle Si standing tall and proud with a football in one hand while wearing a #10 jersey.

“Phil wasn’t the only athlete in this family, boys,” Uncle Si captioned the picture. “130 pounds soaking wet, and I was knocking them off their feet!”

If you’ve ever wondered what Uncle Si looked like as a teenager, check out the photo below. It’s crazy to see a picture of him from so long ago!