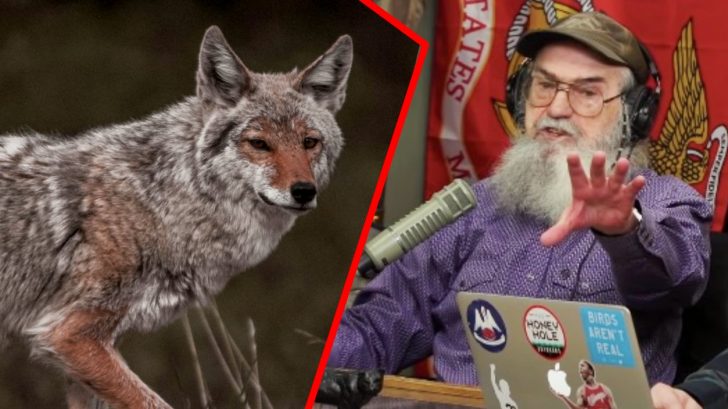 As an avid outdoorsman, it stands to reason that Duck Dynasty star Uncle Si has come into close contact with many animals.

During one installment of the Duck Call Room podcast, Si shared some wild stories about the times he’s been chased by coyotes. And yes, we said “times,” because it’s happened more than once!

Uncle Si has been chased by coyotes two times in his life. That’s two times too many if you ask us!

So how did Uncle Si find himself in such predicaments?

In his first story, a young Si tagged along with his brother, Phil, and his friends to go looking for catfish on the Red River. Si went into a clearing where the boys were going to make camp, and then…

“So I’m sitting in this little clearing…it’s starting to get dark…and all of a sudden…a coyote starts howling,” Uncle Si says.

He saw one coyote peek its head out from some brush nearby. He started noticing more coyotes in the area, and became concerned.

When the coyotes came toward Si, he took off running. He ran through tall grass before reaching a dirt road, all while being chased by the “pack” of coyotes. He continued running, and reached a gravel road before finally ending up on a paved road.

Si, who was just a child at the time, was wearing a pair of kids’ tennis shoes. He was running so fast, he claims he melted the bottoms of his shoes.

Uncle Si was also with Phil the second time he was chased by coyotes. They were walking through the woods after a successful day in the water, and they were hauling a bunch of ducks back with them. Si says the coyotes could smell the ducks, and began following him and Phil.

“They literally chased us out of the woods,” Si says.

Check out the video below to hear Uncle Si speak in detail about the two times he’s been chased by coyotes. He starts telling his stories around the 49:30 mark in the video if you want to skip right to that time.