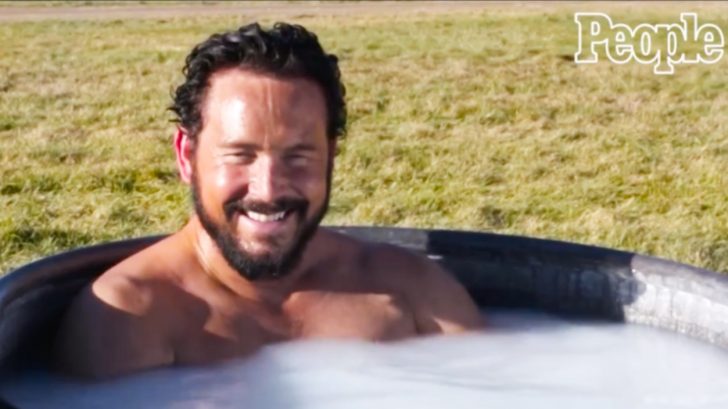 Hauser, who plays Rip Wheeler in the hit television show, Yellowstone, was more than willing to jump into a water trough for a photo shoot with People. The actor seemed perfectly comfortable in the same metal tub used for the show.

“I did a trip with a few buddies of mine in Costa Rica, and we actually never went inside and had a proper shower,” Hauser admitted to People. “I’m pretty accustomed to it. It’s refreshing and especially if the water temperature is right, it’s just beautiful.”

The 45-year-old actor also opened up about his personal life and did not shy away from the tough questions! Hauser spoke about the hardships of being away from his wife and three children. The actor stated:

“It’s been a little rough over the last couple of years just because I’m away for five months at a time. It’s not easy to parent from afar. Steely is an absolute pistol, and they’re great boys. When I’m away they kind of take over, making sure that mom and Steely are watched over. That’s how I raised them and I’m proud of them for that.”

While Hauser misses his family on set, the actor also admits that filming in Montana is also “magical.” In the issue, Hauser revealed his favorite part about Montana, and his answer might surprise you. The actor told People:

“My favorite time of day is sunset and sunrise. Especially up here. I don’t know if you can see these mountains behind us, but the sun basically comes right over this and over the Yellowstone ranch. And it goes right behind these mountains here into Trapper Peak. And it’s just to die for. I mean, the magic hour here is just stunning.”

Hauser ended his interview with a 10-year prediction. A decade from now, the actor wants to “have a nice little island” and enjoy the beach life with his family, but for now, you can catch him on TV as a rancher.

Look out for Hauser in Yellowstone’s season four return next June!