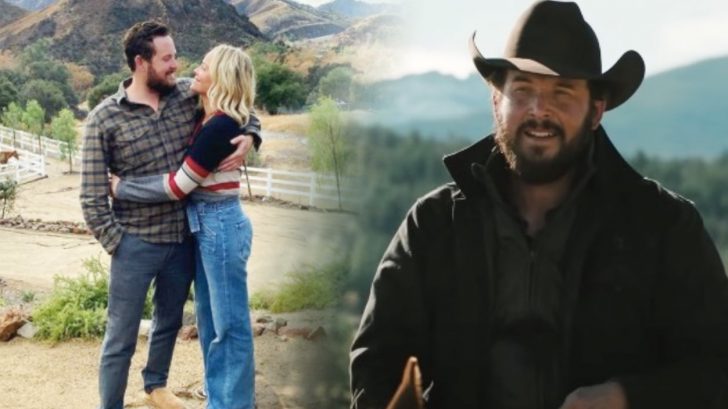 Cole Hauser is known for playing Rip Wheeler on Yellowstone.

Since each episode draws in millions of viewers, Cole is one of the most-watched actors out there.

All of that popularity means that Cole has his fair share of female admirers. You just have to look in the comments section of any picture Yellowstone shares of Rip to get an idea of how crazy the ladies are for him.

No picture drew more attention than one Cole shared ahead of the Yellowstone Season 4 premiere.

The picture shows him soaking wet in a water trough, and was taken by Yellowstone’s still photographer Emerson Miller.

“Listen, I open my Instagram up during school pick up line. I audibly gasped…” one fan commented on the photo.

Another commenter said what a lot of people were thinking when they wrote, “Oh dear God…….”

“RIP TO ANYONE HAS LAID EYES ON THIS PIC,” wrote another fan.

There’s no denying the fact that Cole is one of the most-admired actors in the world. But what does Cole Hauser’s wife think about all of the attention he gets?

Entertainment Tonight’s Cassie DiLaura interviewed Cole in the leadup to the Season 4 finale of Yellowstone. Cassie asked Cole how Cynthia feels about all of the women who go wild for him and Rip.

“She doesn’t see any of that,” Cole said. “She is one of those amazing women, she’s been with me for so long that she knows the ins and outs of what we do.”

Cynthia is also good friends with Kelly Reilly, who plays Beth Dutton. “She loves Kelly, they get along great,” Cole said.

It’s so sweet to hear about Cole and Cynthia’s relationship. She must be extremely proud of everything he’s accomplished on Yellowstone.

Tune in to the video below to watch some of Rip’s best moments on the show. Cole does a great job portraying him!