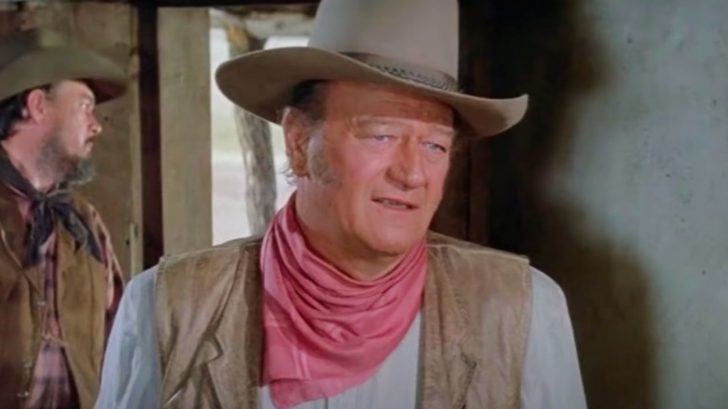 Even though John Wayne had a stunt double perform some of the more challenging stunts in his films, he liked to do his own stunts as often as possible. For example, when he was filming 1963’s McLintock!, he was adamant about performing a stunt where he jumped from a hay loft to a pile of hay below him.

John’s son, Michael, served as the film’s producer. He recalled how his dad insisted on performing this particular stunt himself, even when the studio was hesitant. Since John was such a valuable actor, the studio didn’t want to risk him getting injured.

But John won the argument in the end. He got to perform the stunt himself, although it was also filmed with a stunt double in case anything went wrong when John did it.

While the studio was concerned about John harming himself while filming that stunt in McLintock!, he was perfectly fine! However, he was injured while filming another movie a few years later.

This incident occurred when John was working on the 1969 film The Undefeated.

In 2019, John’s official Facebook page described what happened. Wayne fell off of his horse on set and broke three ribs as a result. He also tore a ligament in his shoulder, “which left one arm immobile.”

While filming The Undefeated, Duke fractured three ribs from a horse fall and then tore a ligament in his shoulder which…

According to The Undefeated‘s trivia section on IMDb, John took just two weeks off work to heal. Even though he was surely in serious pain, he didn’t want to let his fans down and made sure to finish the movie.

In order to maintain continuity, the movie’s Director Andrew V. McLaglen had to film John at an angle from that point forward to keep his injury hidden. Did you ever notice this change in the way John was filmed?

Despite his injuries, John pulled through and finished The Undefeated. It was one of two movies he released in 1969, with the first being True Grit. He actually won an Academy Award for his role in the latter film!

Watch John’s acceptance speech at the Academy Awards below.