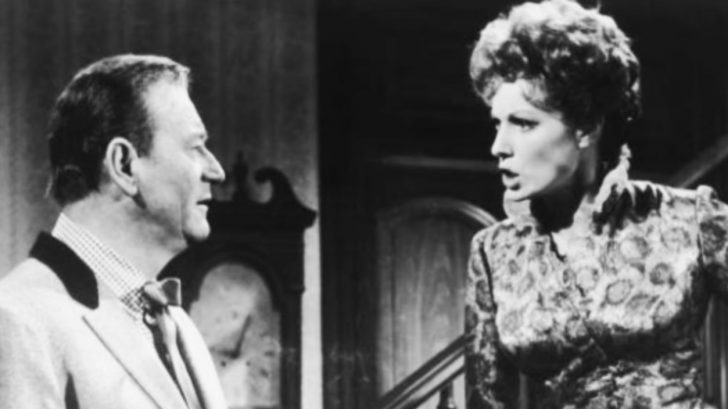 In the immense list that is John Wayne‘s filmography, one title stands out among the rest. That movie would be McLintock! which starred Wayne and Maureen O’Hara in the lead roles.

Loosely based on William Shakespeare’s The Taming of the Shrew, McLintock! is a Western in which John played the role of cattle, timber, and mining baron George Washington “G.W.” McLintock. Maureen played his estranged wife, Katherine, who moves out East after suspecting that G.W. cheated on her.

However, she eventually comes back to his town, and the two find themselves tangled up in a series of messes.

The film also focuses on the couple’s daughter, Becky, who was played by Stefanie Powers. Once Becky comes back to town after her time away at college, she brings along a suitor named “Junior” Douglas, who was played by Jerry Van Dyke. But eventually, Rebecca ends up falling in love with a young man who lives in her father’s home named Dev, who was played by John’s son Patrick.

If you’re a fan of John’s movies, you’ve surely seen McLintock! a time or two…or more. But there’s a few facts about the film and its creation that you’re likely clueless about.

That’s what we’re here for, to tell you those facts! Are you excited to learn what they are?

1. The Movie Was Produced By John’s Son

John Wayne was always good about including his children in his projects, and ended up launching their careers in the process. While you likely already knew before reading this list that the character Dev was played by John’s son Patrick, did you know that another one of his children was involved in the film as well?

It turns out that John’s eldest son, Michael, served as the sole producer of the film. Although Michael had worked on many other films in the past, McLintock! was the first that he ever fully produced.

2. John Insisted On One Of The Actresses Being Cast

One of the supporting roles in McLintock! was played by the immensely popular and beloved Yvonne De Carlo. She played Louise Warren, a widow who moves in to McLintock’s home with her two children and serves as the housekeeper and cook.

While Yvonne appeared in a number of starring roles in earlier years, she was forced to accept supporting roles as her career declined. You probably didn’t know this before, but she may not have ever been cast in McLintock! if it wasn’t for John insisting that she be given a part.

John wanted Yvonne to be cast in the film because her husband, stuntman Bob Morgan, had been seriously injured while working on the movie How the West Was Won, which John also starred in. The injuries put an end to Bob’s career, hence why John wanted Yvonne to have a role in McLintock! when it came time to start filming it.

3. John Wanted To Do One Stunt Because It Looked Fun

According to John’s son and the film’s producer, Michael, John really wanted to do one of his own stunts in the film. The stunt required John to jump from a hayloft down into a pile of hay below.

Michael said that his dad thought the stunt looked like a lot of fun, and he declared that he wanted to do it himself. The studio wasn’t too keen on the idea, since John was one of the brightest stars in Hollywood at the time.

John finally won the argument, and he got the chance to perform the stunt himself. However, the studio also shot the scene with a stuntman as well in case something went wrong.

4. There Isn’t A Bit Of Mud To Be Found In The Famous Brawl Scene

Sometimes, films have to substitute other substances for their real-life counterparts, such as blood, or even ice cream. In the case of the famous mudhole brawl scene that takes place in McLintock! the “mud” wasn’t mud at all!

In reality, the substance used in the mudhole brawl scene was a material called bentonite. This material is typically used while drilling oil wells, and resembles chocolate syrup in terms of appearance and consistency. On the movie screen, it stands in as a good substitute for mud, which is usually much thicker.

John Wayne buffs know that he’s famous for his use of the word “pilgrim” and the various movie lines containing that word. One of the most frequently quoted lines is “Whoa, take ‘er easy there pilgrim.”

But as famous as John was for saying “pilgrim,” he only ever used the term in two movies. The first was The Man Who Shot Liberty Valance, which the above mentioned line comes from. In that film, he used the term “pilgrim” as a nickname for one of the other characters. He says the term a total of 23 times in that movie.

McLintock! was the second and final film that John used the term “pilgrim” in, and he only said it once. Do you remember when? HINT: It’s in the scene in the video above.

6. A Male Stunt Double Performed One Of Maureen’s Stunts

Like John, Maureen also had a stunt in McLintock! that she desperately wanted to do herself. The stunt involved her jumping through a plate glass window, which the studio deemed as way too dangerous for her to do herself.

But they didn’t stop there. Not only did the studio think it was too risky of a stunt for Maureen to do, but they felt it was even too dangerous for a trained stuntwoman to execute. As a result, a stuntman ended up performing the stunt instead.

Stuntman Dean Smith was the one who completed the stunt, all while wearing a wig and Maureen’s costume so he resembled her character.

7. The Mexican Government Lent 500 Steers To The Film

There was one scene in McLintock! that required a whopping total of 500 Longhorn steers. Since there aren’t many people out there who have 500 steers handy, they had to go looking for a place to find some.

John and the crew ended up getting those steers from an unlikely source…the Mexican government. They offered to loan the crew of McLintock! the 500 Longhorns they needed, and they were able to shoot the scene as planned.

Which one of these facts about McLintock! did you find the most entertaining? Let us know in the comments!