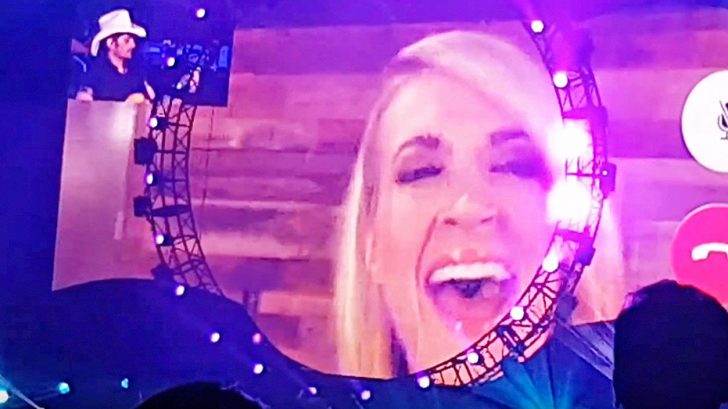 Country music star Brad Paisley treated his London audience to a riveting performance of his duet “Remind Me,” finding an alternative route to bring an absent Carrie Underwood to his fans! Performing at the C2C (Country to Country) Festival, Paisley kicked off his intro to the ballad without Underwood by his side, although shocking fans with an all-inclusive surprise that placed the “Dirty Laundry” singer behind the crooner.

A Facetime video appeared on a large screen as Paisley continued to sing, revealing a dolled up Underwood just in time for her angelic chorus! That audience roared with cheers and applause as the blonde bombshell sang alongside Paisley, making her musical appearance despite being miles away!

Made a quick #FaceTime with the boss AKA @carrieunderwood to straighten set mix up. #HardAct to follow 😉 @reba @zacbrownband @C2Cfestival pic.twitter.com/BlPxuezdkZ

As the performance wrapped up, Paisley thanked the singer for her time, in which she hilariously responded, “Thank you! I wish I could be there! But this is better because I don’t actually have to be with Brad!” After their comical banter, Underwood wished the singer and his audience a great night before signing off!

Talk about the awesome perks of technology! You can check out their one-of-a-kind performance below!