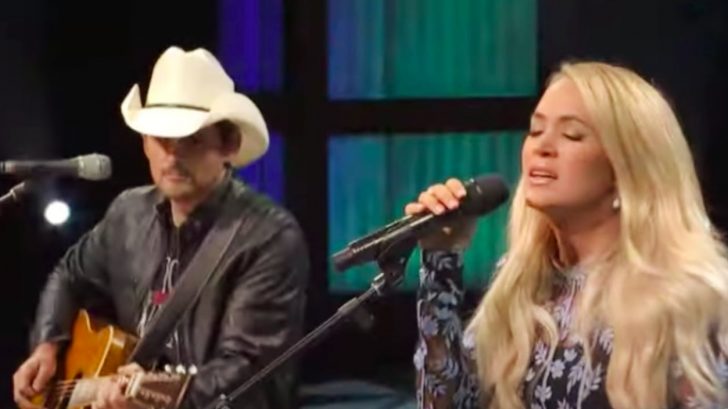 In September 2020, Carrie Underwood and Brad Paisley reunited to perform together on the Opry stage. The two good friends and former CMA Award co-hosts took turns singing their own hits and also performed a few duets.

On top of all of that, Paisley and Underwood united to sing “Whiskey Lullaby.” Paisley released the song in 2004 as a duet with Alison Krauss.

“Whiskey Lullaby” went on to win the CMA’s Song of the Year Award and has since been certified 2x Platinum.

Even though Paisley recorded “Whiskey Lullaby” with Krauss, she’s not the only person who has served as his duet partner on the song. Back when Paisley and Underwood used to tour together years ago, she would join him on stage to take Krauss’ place.

Paisley referenced this fact before he and Underwood started to sing “Whiskey Lullaby” during their combined Opry appearance. “…and then you got stuck singing with me a lot more after that,” he joked with Underwood.

The duo then moved in to their performance of the song, which was gentle, but powerful. Their only musical accompaniment was the sound of two acoustic guitars.

Since Paisley and Underwood have worked together so many times over the years, they were easily able to connect to each other as they sang “Whiskey Lullaby.” Tune in to the clip below to see how their performance played out.