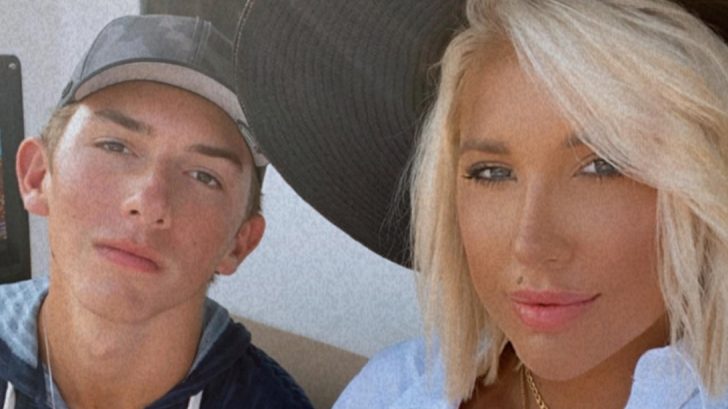 Just days before his parents were sentenced to a combined 19 years in prison, Grayson Chrisley was injured in a car accident near Nashville.

It was reported at the time that the 16-year-old Chrisley Knows Best star totaled his Ford F-150 after he rear ended another truck on the interstate. Authorities said that Grayson couldn’t recall details of the accident, “possibly due to a potential head injury,” TMZ reported.

The teen was taken to a local hospital via ambulance. The accident added to an already trying time for the Chrisley family. Grayson’s parents, Todd and Julie Chrisley, were awaiting sentencing for tax and bank fraud when his accident occurred.

In a newly released episode of her podcast Unlocked, Grayson’s sister Savannah and his mom opened up about the car crash.

Savannah shared that Grayson and the other vehicle involved likely overcorrected due to another vehicle “weaving in and out” on the interstate.

“His car is totaled….It was bad. I remember pulling up…I was the first one he called,” Savannah recalled, adding that her brother made his accident sound minor. “He made it sound like a fender bender. When I tell you the whole front of his truck, every airbag deployed…it was bad. When I showed up, literally my heart sank because, for anyone that knows, Grayson has always had a special place in my heart.”

Savannah also shared a conversation she had with Grayson at the hospital that indicated that his main concern was for his family.

“This was the last thing everyone needed,” Grayson reportedly told his sister.

“Dad was like, ‘Grayson, you’re alive. You’re safe. Who cares. It’s a car. That’s what insurance is for. You’re alive and you’re safe and you’re well,'” Savannah remembered her dad saying.

Todd Chrisley opened up previously on his own podcast about his son’s car accident.

“I remember looking at Grayson on that stretcher in the back of that ambulance and him crying and the police stopping to talk to me before they took me to him and all I could think of was thank you God because he is alive and crying,” Todd recalled on the November 17 episode of his Chrisley Confessions podcast.

“Then, they said you want to ride with him to Vanderbilt Children’s Hospital and I said, ‘I’m not going anywhere. I’ll be with him until he comes home with me,'” he continued. “So, I remember holding his hand and saying, ‘It’s ok. It’s gonna be ok.'”