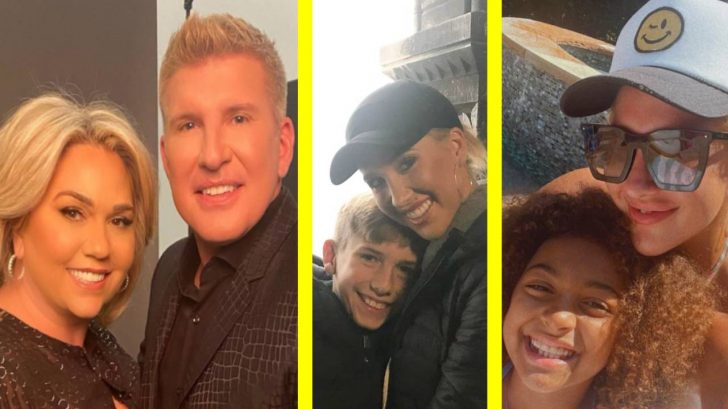 One day after reality stars Todd and Julie Chrisley were sentence to a combined 19 years in prison, the three television shows that followed them and their family have been cancelled, per a report from Deadline.

The Chrisleys starred in the USA Network show, Chrisley Knows Best, along with their children Lindsie, Kyle, Chase, Savannah, Grayson, and Todd’s mom, “Nanny” Faye Chrisley. The show premiered on USA Network in 2014. According to Deadline, USA Network renewed the show for a tenth season about a month ago. They will release a few episodes that were filmed before this trial.

Savannah and Chase got their own spinoff in 2019 called Growing Up Chrisley. The premise of the show was that they were trying to prove to their father that they could make it in the real world without his help. After three seasons on USA, the show moved to E! for its fourth, and now, final season. Their last episode aired October 19, 2022.

The other show is dating show Todd was set to host, but that has been scrapped as well. Besides the fate of their shows, the public has wondered what will happen to Todd and Julie’s 16-year-old son Grayson, and 10-year-old granddaughter, who they adopted when she was 1 year old. Although Savannah is Chloe’s biological aunt, they consider each other sisters.

Before going to the sentencing of her parents, Savannah recorded an emotional episode of her podcast, Unlocked. The episode is titled “By The Time You Hear This,” and she talks about her feelings going into the sentencing.

The description of the episode says:

“As she was recording this, she was well aware that she could come home from Georgia without either of her parents and with custody of both of her younger siblings, her brother Grayson who is 16 and her sister, Chloe, who is 10. In case you don’t already know about this very special relationship, Chloe is Savannah’s biological niece but was adopted by her family and has been raised by this nuclear unit since she was 1.”

Savannah said, “I may come home without both of my parents,” and that she could “come home Tuesday and…have custody of a 16-year-old and a 10-year-old, and we spend our first Thanksgiving not as a family. I’ve never been away from my family for holidays.”

Continuing, Savannah said, “I think there’s a level of guilt, too, for myself, of knowing that Chloe and Grayson are not going to have that same feeling of, ‘Are Mom and Dad going to be home tonight?’ And I think that’s the hardest part, is me trying to navigate how you teach two younger children who aren’t fully developed that yet and how to get them to understand the circumstances. That’s a really, really difficult thing.”

“The best way I can describe it is grieving the loss of parents who are still alive, which is a really weird thought process and feeling,” she said.