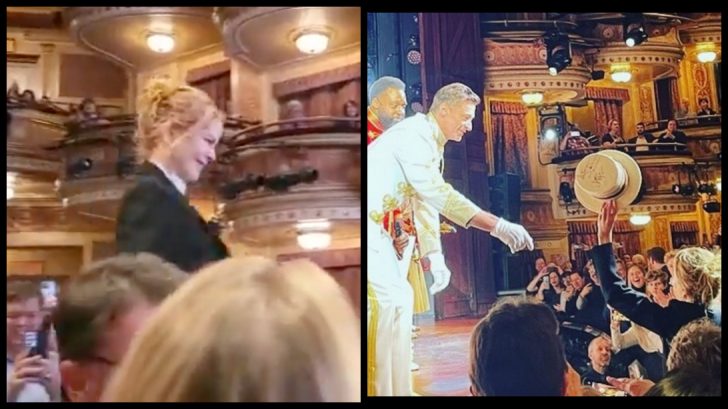 Attendees at Broadway’s “The Music Man” were in for a surprise when Nicole Kidman called out a generous winning bid during the post-play charity auction.

Footage captured by audience members show members of the crowd bidding to win “The Music Man” star Hugh Jackman’s signed hat. Then the familiar voice of Nicole Kidman calls out, “One hundred thousand.” Those in attendance as well as the cast on stage erupted with applause then realized who had made the winning bid.

Audience members can be heard saying, “It’s Nicole Kidman!” as the actress makes her way to the front of the stage.

“I love you. I love Broadway. I love what they do…Broadway Cares,” Nicole told Jackman before he handed her the signed hat. “But, I also want to say that this show is extraordinary.”

“I’ve known Nic for almost 30 years and I’ve worked with her. I can tell you that this is not a surprise to me,” Kidman’s fellow Australian, Hugh Jackman, told the crowd. “She is one of the most generous souls I know. You are a beautiful beautiful person. I love you. Thank you for your generosity.”

The auction was a benefit for Broadway Cares/Equity Fights AIDS.

The charity’s executive director Tom Viola said in a statement, “Broadway Cares is blessed with friends across Broadway. But we have no greater champion than Hugh Jackman. This extraordinary gift from his pal Nicole Kidman is by far the largest donation for any one auction item ever. That’s 20,000 meals and 2,000 doctor visits this holiday season for those living with HIV/AIDS, struggling with COVID-19 or facing other life-threatening challenges.”

“Ms. Kidman’s remarkable support of Broadway Cares/Equity Fights AIDS on Saturday night was wonderful to see and her extraordinary generosity will be deeply appreciated by the entire Broadway community,” Kate Horton, “The Music Man” producer, said in a statement.

Nicole took to Instagram to respond to Hugh Jackman’s post about her generous auction bid, and also shared a photo of what appeared to be her daughter modeling the signed hat.

Watch the exciting moment unfold in the video below.