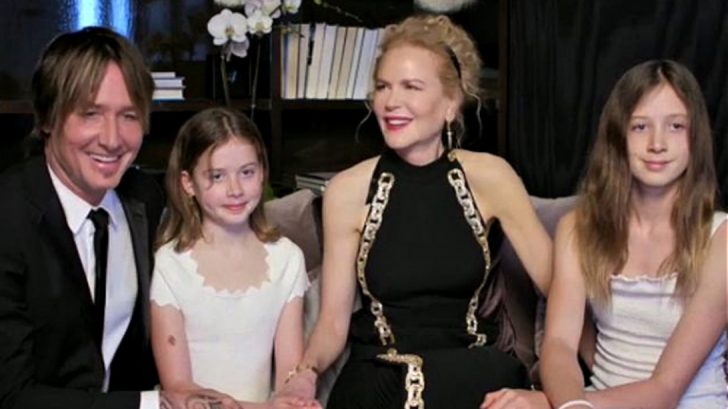 Like many high-profile celebrities, Keith Urban and Nicole Kidman have chosen to keep their children out of the spotlight. So, it was a surprise to see couples’ two daughters on screen during Sunday night’s Golden Globe Awards show.

The Golden Globes went virtual this year due to the COVID-19 pandemic, so many stars appeared virtually to take part in the festivities. Nicole Kidman, who was nominated for her role in “The Undoing,” was joined by her country music star husband, Keith Urban, and their daughters, Sunday Rose (12) and Faith Margaret (10).

The adorable family of four dressed up for the occasion and were seated on the family couch to watch the broadcast.

Kidman and Urban, who wed in 2006, have rarely shared glimpses of their children with their fans as to protect their privacy. In 2019, Kidman posted a rare throwback photo to celebrate Faith’s birthday.

But, the Golden Globe Awards appearance was the first time the couple has publicly appeared at an event with both of their beautiful children in full view. We couldn’t help but notice that Sunday Rose is her daddy’s lookalike while Faith Margaret is Nicole’s mini-me.

Keith and Nicole may have kept their daughters out of the spotlight, but the pair have never shied away from talking about them. In an interview with Vanity Fair, Kidman told shared that she and Keith are very hands-on parents. They take Sunday and Faith along on tours and movie sets as much as possible and even chaperone field trips when they’re home. The parents even have strict rules that Kidman says might make them “unpopular.”

“They don’t have a phone and I don’t allow them to have an Instagram,” she says. “I try to keep some sort of boundaries.”

Check out one of our favorite Keith and Nicole moments in the video clip below.