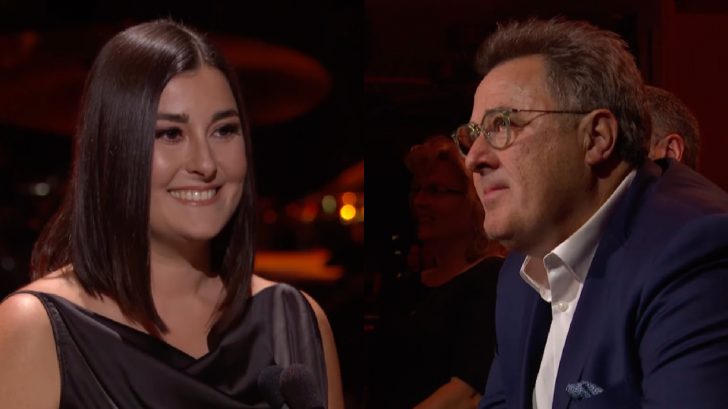 Vince Gill’s daughter Jenny took the stage during the CMT Giants television special this week to honor her dad with a touching story from her childhood.

Vince Gill was one of the biggest country stars of the ’90s with 18 CMA Awards, including two Entertainer of the Year Awards and five Male Vocalist Awards, 22 Grammy Awards and a Country Music Hall of Fame to his credit. But, it’s likely that his proudest achievement was being an incredible dad to his daughters Jenny and Corrina.

Gill’s daughter Jenny has shared numerous stories on social media about what it was like growing up as Vince’s daughter. Most of the stories are light-hearted and funny, a clear indication that she inherited her dad’s fantastic sense of humor. For instance, Jenny recalled a time early on in her dad’s career that fans were seeking out his home.

Jenny added that fans started driving by their house and taking pictures, something she found annoying at the time.

“So one day I’m outside riding my bike with my neighborhood friends, and a car stops. They say, ‘Hey kids. Do y’all know where Vince Gill lives?’ And I say, ‘Yeah. He lives in that house right there.’ And I totally pointed at my neighbor’s house.”

Jenny said that she watched the fans take pictures of the wrong house for several minutes, something that she says brought her “so much joy.”

But, it was the story that Jenny Gill shared during Friday night’s tribute to her dad that brought tears instead of laughs.

Jenny, who is Gill’s only daughter with Sweethearts of the Rodeo singer Janis Oliver, took the stage to share a story about how her dad turned down the initial invitation to make his Grand Old Opry debut. He turned down the invitation in order to keep his word to his then-6-year-old daughter, a moment she has never forgotten.

“When I was in first grade I really wanted to play in my school talent show. So, I asked my dad, who I knew could play guitar really well, if he would play for me sod that I could sing. And, of course he said ‘yes.'” Jenny shared, as her dad is shown on camera fighting back tears. “So we were practicing and practicing for the show that Saturday night. And then he got a phone call. It was his first-ever invitation to play on the Opry. And he asks them, ‘This Saturday night?'”

Jenny recalled that her dad told the Opry he couldn’t make it. “So, instead of making his Opry debut that night, he showed up at my elementary school to play for his 6-year-old daughter. And we performed ‘You Are My Sunshine.'”

Later in the evening, Vince Gill took the stage to share the rest of the story.

“Here’s the best part of that story with Jenny and the Opry….Fast forward a million years later and she marries Josh,” Vince shared, adding that they were all trying to decide what song they should play for their father-daughter dance at Jenny’s wedding.

Turning down the Grand Ole Opry’s initial invitation didn’t hurt Vince Gill’s career. In fact, he was inducted as a member in August 1991, only 7 years after he moved to Nashville.

Watch Jenny Gill and Vince Gill share this sweet memory in the video below.