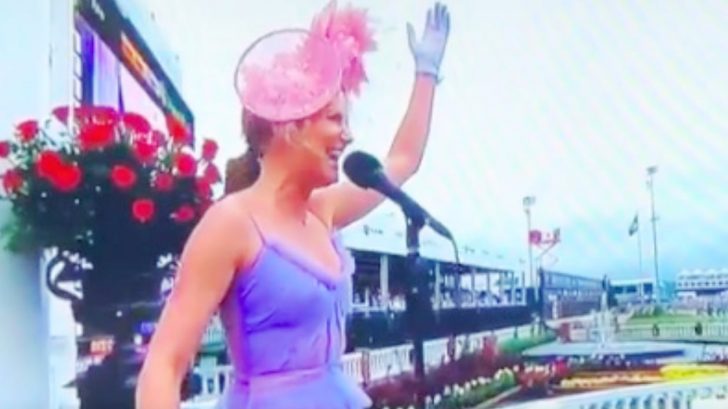 For any artist of any genre, it is always a great honor whenever someone asks you to perform the National Anthem at an event. Country artists are known for delivering some of the best National Anthem performances in history, which is why they are often called on to sing at various sporting events around the country.

Many country stars also chip in and perform the Anthem at Nashville Predators matches. The tradition of having famous artists sing the Anthem started back in 2017 when the Preds were in the playoffs.

One of the most highly praised renditions was delivered by Carrie Underwood, who has also performed the National Anthem for the Super Bowl before.

Another country artist known for her outstanding performances of the National Anthem is Jennifer Nettles. The Sugarland member has always received great praise for her rendition of the Anthem, which is why she was asked to perform it for the Battle at Bristol at the Bristol Motor Speedway in 2016.

As you would expect, Nettles’ above performance received a wealth of praise in the days following its occurrence. Even now, three years later, it is still cited as a prime example of how the Anthem should be performed.

So it came as no surprise when Nettles was invited to perform the National Anthem prior to another iconic American sporting event…the Kentucky Derby. The invitation also gave Nettles the chance to attend the race for the first time ever, and she was loving it.

While walking the red carpet before the race started, Nettles gushed about her experience at the race. She made it clear that she’s a huge fan of the elaborate hats that all of the ladies get to wear during the Derby weekend.

During that interview, Nettles also offered some insight into how she’d be singing the Anthem that day. She said that she wouldn’t change up the song’s traditional style all that much.

“I like to add a little bit of style to it but I’m not super flowery about it,” she said. She noted how people like to sing along to the Anthem when it’s performed, and she doesn’t want to throw them off by making too many changes.

When it finally came time for Nettles to sing the Anthem, she delivered the traditional performance she promised on the red carpet. And as expected, her rendition blew America away.

Those who watched took to Twitter to rave about the performance.

In case you missed Nettles’ performance, or you simply want to relive it, be sure to check out the video below. It shows her performance in its full glory, and it is absolutely stunning.

After this, we wouldn’t be surprised if Nettles gets a few more invitations to perform the Anthem at more events in the future!

.@JenniferNettles You nailed the #NationalAnthem ??, yet again! So very proud of you! Love you! ? pic.twitter.com/PC5ysdjt0L