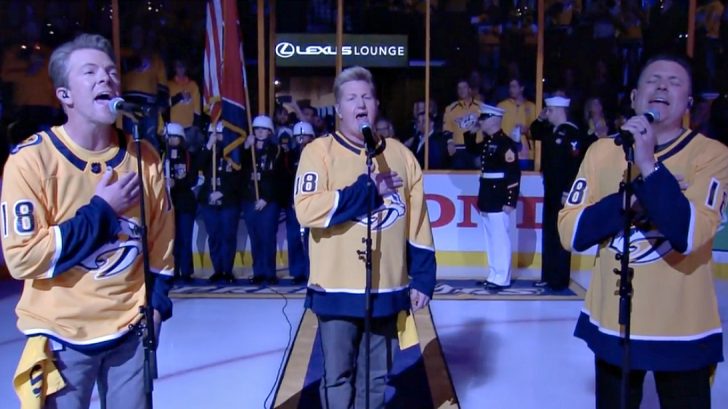 Country fans everywhere are cheering on the Nashville Predators as they kick off their second NHL Stanley Cup bid in as many years. We hope they make it to the championship game for two reasons….because they are a great group of guys who fell just short of the title last year, and because we can’t wait to see which of Music City’s biggest stars they have lined up for home playoff game national anthem performances.

During the Preds playoff run last year, the team’s impressive anthem lineup included Little Big Town, Vince Gill, Trisha Yearwood and Carrie Underwood, leaving fans anxiously anticipating what this years’ run holds. Prior to Game 1 of the Stanley Cup Playoffs Thursday night against the Colorado Avalanche at Bridgestone Arena, country trio Rascal Flatts took to the ice to deliver one of the most stunning renditions of the anthem that we’ve heard in awhile.

The crowd erupted as the trio was introduced, and became even more excited when the began to sing. Rascal Flatts’ lead singer Gary LeVox carried most of the song on his own before bandmates Jay DeMarcus and Joe Don Rooney joined in with spine-tingling harmonies.

Listen to Rascal Flatts sing “The Star-Spangled Banner” in the video below and let us know what you think!