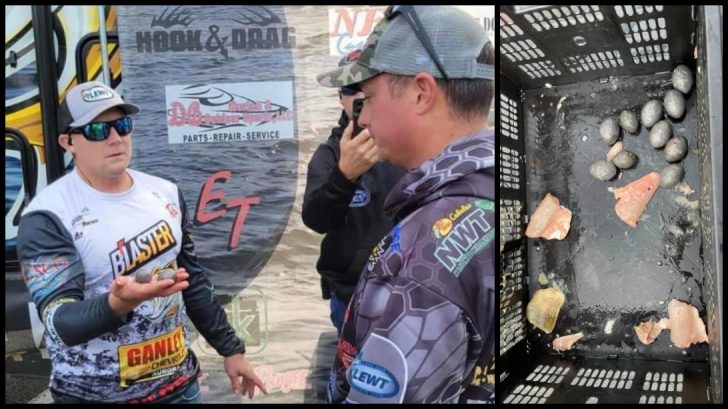 A cheating scandal was uncovered at an Ohio fishing tournament when some suspiciously heavy fish were found with weights inside.

The 2022 LEWT (Lake Erie Walleye Trail) Championship tournament final took place in Cleveland, Ohio, on Friday (September 30). The annual event is typically held over the course of two days, but was a single-day event this year due to wind advisories.

The Lewt Championship, currently in its 18th year, brings in 60 two-person teams to compete for a large prize purse. According to their website, the LEWT’s goal is “to have an affordable, professionally run tournament series on Lake Erie that sparks interest for the weekend angler, as well as the veteran tournament anglers in the club.”

Part of the success of the fishing tournament has been its ability to maintain integrity in a highly-competitive sport. But, that integrity was put to the test Friday when it was rocked with a cheating scandal as one team was found to have put weights and fish fillets inside of their catches.

The discovery was made when the tournament’s director, Jason Fischer, and others in attendance, became suspicious when one team’s fish weighed in heavier than they should have.

Fischer told press that one of the team’s fish weighed almost twice what he expected them to. He told CNN that the walleye in the bucket looked like they should weigh around 4 pounds each, but the total weight of the fish indicated they would have to be around 7 pounds each.

“I thought, there’s just no way,” he said. “I could also hear the crowd grumbling, like ‘no way, there’s no way.” He added, “I physically felt the fish, I could feel hard objects inside the fish.”

Video captured the moment that Fischer’s suspicions were confirmed.

A number of now-viral videos show Fischer cut open the fish and pull out lead balls. One member of the two-person team, Jacob Runyan, is seen standing silently nearby.

“We got weights in fish!” Fischer shouted.

Immediately the crowd erupted, shouting profanities and insults at Runyan. The angler stood there emotionless as the crowd jeered.

“You just lost everything,” one person yells. Footage shows Fischer telling Runyan to leave and instructing the crowd not to touch him.

Runyan and his teammate, Chase Cominsky, were in first place after the weigh-ins were complete. They were set to win nearly $30,000, Fischer told CNN. The pair were disqualified and the incident is now under investigation.

Fischer went live on Facebook Monday (October 3) to issue an official statement regarding the incident.

Fischer started his Facebook Live by issuing an apology to youth who attended the event and witnessed the chaos that ensued after the cheating was uncovered.

“On Friday…we witnessed one of the most disgusting, dishonest acts that the world has ever seen in live time. There’s always been stories about dishonesty in competition, but I personally have never seen anything quite like this.The individuals involved here appeared to have put greed and ego in front of anything else, forever tainting our sport,” Fischer said.

He went on to share that when he took over as tournament director a few years ago, his goal was to “run a tight ship” and bring a new energy to the event. He then shared stories about the goodwill anglers in his area have spread through fundraisers, charity events, and fishing programs. Fischer called on those watching to highlight the good stories when talking about the sport of competitive fishing, instead of focusing on “12 ounce weights and dishonesty.”

Fischer vowed to maintain the integrity of his sport and promised to implement new rules at weigh-ins to combat cheating.

Watch the video of Jason Fischer discovering weights inside of the fish below. NOTE: Viewer discretion is advised due to coarse language.