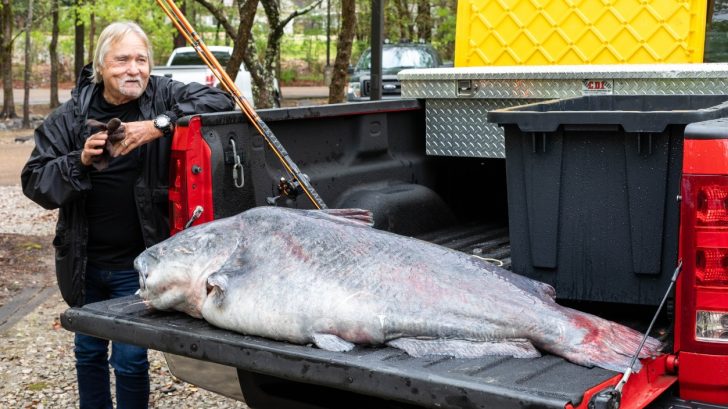 The state record in Mississippi for catching a blue catfish has finally been beaten after 25 years, according to the Mississippi Department of Wildlife, Fisheries, and Parks.

The department said that lucky angler Eugene Cronley from Brandon, Mississippi caught a 131-pound fish on April 7th from the Mississippi River near Natchez. He beat the previous record by 36 pounds

“The fish shattered the previous rod and reel record of 95 lbs. caught by Dakota Hinson in 2009 and is larger than the trophy record blue catfish of 101 lbs. caught by the team of Freddie Parker and Brad Smith in 1997,” the wildlife department wrote on Facebook.“Interestingly, both of those fish were also caught from the Mississippi River near Natchez.”

Eugene told the department that he caught the monstrous fish with a rod and reel and was using skipjack herring as bait to lure it onto the hook. He called it “truly a fish of a lifetime” and said that it took him about 40 minutes to reel it in.

Photos shared on Facebook show the big blue catfish stretched out on the tailgate of a pick-up truck and it was spanning nearly the entire length of the tailgate.

Wildlife officials noted that blue catfish can live up to 25 years in the wild and this one was likely around that age.

National Oceanic and Atmospheric Administration Fisheries also noted that the biggest blue catfish that was reportedly caught was 143 pounds and was caught in an inland lake on the Virginia–North Carolina border.