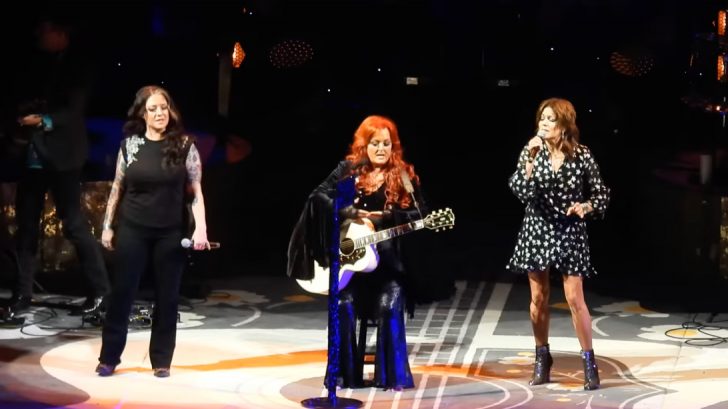 Green Bay, Wisconsin’s Resch Center was filled with the sounds of country music on October 8 as Wynonna Judd and friends stopped by to sing.

The Green Bay concert was 4th of 11 stops of The Judds: The Final Tour featuring Wynonna. Martina McBride serves as opening act at every concert on the tour, with other country artists, including Little Big Town, Trisha Yearwood, Faith Hill and others, taking turns. During Saturday’s concert, Ashley McBryde joined Martina and Wynonna on stage.

McBryde and McBride offered up harmonies on some of the Judds’ classics like “Love is Alive” and Wynonna’s own “No One Else On Earth.” But, it was perhaps Wynonna, Ashley and Martina’s unexpected coming together to pay tribute to Loretta Lynn that served as one of the more poignant moments of the night.

The trio shared the stage to sing Lynn’s signature hit “Coal Miner’s Daughter” just five days after she died at her home in Hurricane Mills, Tennessee, at the age of 90.

Martina kicked off the song before Ashley then Wynonna took their turns singing the familiar lyrics.

“Yeah, I’m proud to be a coal miner’s daughterI remember well, the well where I drew waterThe work we done was hardAt night we’d sleep ’cause we were tiredNever thought of ever leaving Butcher Holler”

When the song concluded, Wynonna told the crowd, “We must pay tribute to the ones that came before us, and we mustn’t forget where we come from in country music.”

Wynonna Judd was one of the first to share memories of Loretta Lynn after her passing.

As news spread about Loretta Lynn‘s death, fans around the world shared condolences and their own stories about the Queen of Country Music. Wynonna was one of many of Loretta’s fellow country singers who shared memories and photos of their time together.

“As a young girl, I learned about Loretta from listening to her on the Grand Ole Opry. She was the very first country concert I ever saw. I was 15 and living in a Vegas hotel for a bit, and I would go down to one of the casino show rooms to watch her show every night. I was mesmerized from the first time I saw her walk out onstage in her ball gown,” Wynonna wrote before sharing about the first time she met Loretta at the 1984 CMA Awards, saying that Lynn was the first person to hug her.

“Loretta was like an aunt to me. I would call her and she would tell me stories. Some of my fondest memories of Loretta come from her telling me all about her life in Butcher Holler. During one of my recent visits to Hurricane Mills, she gave me a Bible and a crocheted doily that her Mama made. I will cherish those forever.”

Wynonna added that it is hard for her to imagine life without Loretta Lynn and encouraged her followers to never forget how important Loretta Lynn was and is to country music.

“Let us all turn up her music a little louder for the next generation. Rest In Peace my beloved ‘Retty.’ I will always love you.”

Watch the beautiful moment Wynonna Judd was joined by Martina McBride and Ashley McBryde to sing “Coal Miner’s Daughter” in the video below.