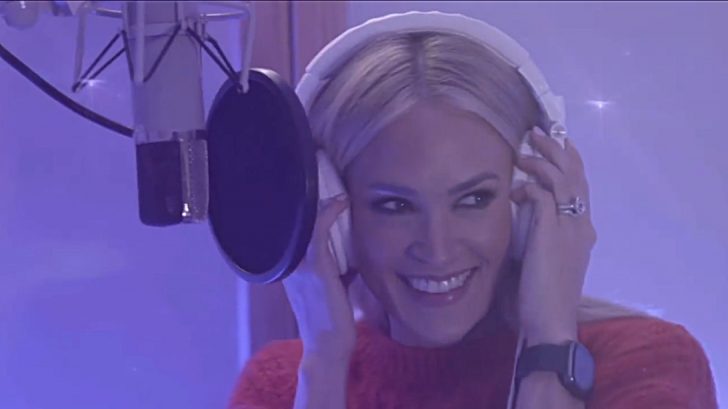 With less than 8 weeks until the release of her highly anticipated new album, Denim & Rhinestones, Carrie Underwood has released a clip of the album’s next single.

The song titled “Crazy Angels” is set to be released Friday (April 22) and is the third single Underwood has released from the new project. The title song “Denim & Rhinestones” and “Ghost Story” were previously released with the singer performing the latter live at this year’s CMT Awards.

“Crazy Angels” was written by Carrie, David Garcia and Lydia Vaughan and features a “throwback” sound as promised by Underwood. In fact, it sounds like a song straight off of a ’90s album by Martina McBride or Trisha Yearwood.

“We cover a lot of ground on this album. We have a lot of songs that have a bit of a ‘throwback’ feel, but they sound super fresh. I grew up listening to so many different kinds of music and that is extremely evident in this body of work,” Underwood’s website reads. “These are musical influences that are all in me and work their way out, and I just decided this time not to get in their way. I think this whole album ended up being a big reflection of me as a person and as an artist.”

Denim & Rhinestones is the first mainstream country album release from Carrie Underwood since 2018’s Cry Pretty. But, the last four years weren’t without new music from Underwood who graced us with a Christmas album, My Gift, a gospel album, My Savior, and an award-winning duet with Jason Aldean, “If I Didn’t Love You.”

Fans of ’90s country are sure to love “Crazy Angels,” Check out the preview clip shared by Carrie below, and listen to the full song on your favorite streaming platform on Friday.