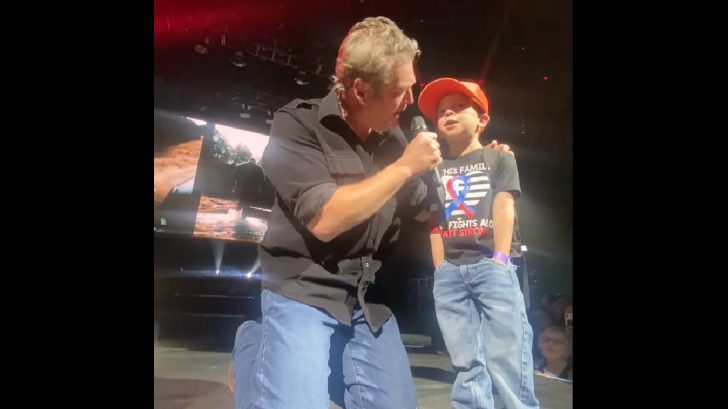 Blake Shelton made a dream come true for a young fan during a concert at Choctaw Casino & Resort in Durant, Oklahoma, on January 29.

Wyatt McKee is only 6-years-old, is one of Blake Shelton’s biggest fans and is currently awaiting a heart transplant. In a post shared to Facebook in early January, Wyatt’s mom shared that an unknown individual had purchased tickets for the grade schooler to see Shelton and she captured his reaction to the news.

“We just got the news that a very nice man who heard about how much Wyatt loves Blake Shelton has paid for his ticket to see him live!!! He’s so excited!! I don’t know this man but thank you so much!!,” Harley McKee captioned the video.

Wyatt got more than he hoped for when Shelton noticed him in the crowd, thanks to a sign he was holding that read “Your smallest biggest fan from Lake Texoma….waiting on a heart transplant.”

The “Austin” singer invited Wyatt to join him on stage.

“Think y’all are having a bad day, put that into perspective right there, man,” Shelton said to the crowd. “The next note he has on here, he asks if he can sing this song with me.”

Shelton knelt down next to Wyatt and together they sang “God’s Country,” one of Wyatt’s favorite Blake Shelton songs. Wyatt’s mom took to social media following the concert to express her thanks to Blake Shelton, saying: “I don’t know if Blake Shelton will ever see this but I just want to let him know he is awesome and officially my favorite person he absolutely made Wyatt’s day thank you so much to him and everyone who stopped us to tell him how great he was on stage and told him they are praying for him!!! Definitely a night to remember!!! #WyattStrong”

See the sweet moment Blake Shelton shared with Wyatt McKee in the video below.