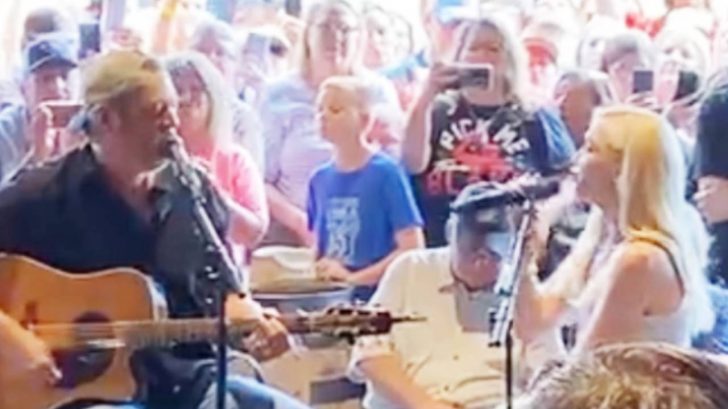 For the first time since they tied the knot, Blake Shelton and Gwen Stefani gave their first live performance – and it was completely unannounced!

On July 3, the couple said “I do” in a chapel built especially for the occasion on Shelton’s Oklahoma ranch with the ceremony being officiated by The Voice host Carson Daly.

According to E! News, after their guests left, Blake and Gwen spent a few quiet days on the ranch with her sons, Kingston, Zuma, and Apollo.

Not long after, the family of five headed back to their home in Los Angeles because it was time to go back to work!

Well, Blake was actually already in the middle of filming Season 21 of The Voice!  His first day back was June 21, as advertised on The Voice‘s official social media accounts revealing that they will be welcoming back a live audience this season.

Ever dreamed of being in #TheVoice audience? ?? Sign up for tickets to see the Blind Auditions LIVE with @BlakeShelton, @KellyClarkson, @JohnLegend, and @ArianaGrande: https://t.co/O75oAvFJtQ pic.twitter.com/EReah2UCXy

According to the ticket site 1iota, the next Battle Rounds take place on July 27 and 28, which means rehearsals are likely currently taking place. Apparently Blake isn’t the only one that needs to work in LA. A source told E! News they skipped a honeymoon because “they both have work commitments coming up so it’s a busy time.”

Shelton is hitting the road in August for his Friends and Heroes Tour, so he revealed he was doing some rehearsals at the Tishomingo, Oklahoma location of his bar Ole Red.

On Thursday (July 15), the country star tweeted that he would be there rehearsing his set.

I’ve got some shows coming up soon so I’m gonna be rehearsing today around 4 CT at @OleRed’s The Doghouse in Tishomingo. Come on out and get yourself a drink if you’re bored. I repeat it’s only a rehearsal… It may not be good but at least it’s free!

According to videos from radio station 93.1 Katy Country, Shelton played an almost 20-minute set before his bride joined him for their hit songs “Happy Anywhere” and “Nobody But You.”

See all the photos and videos from the radio station here.

Watch Blake and Gwen’s first live performance as a married couple below.