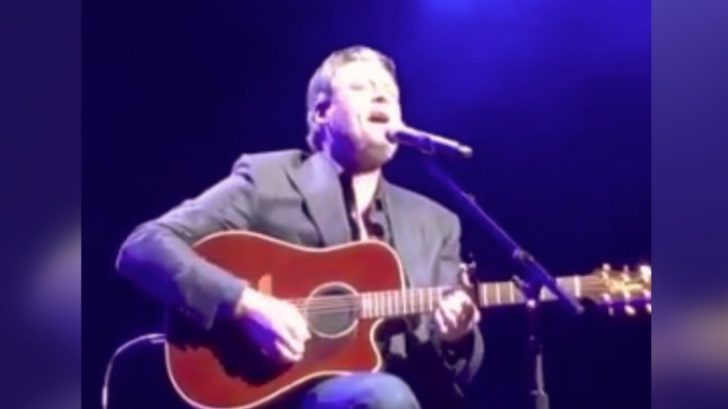 The Song Blake Just Can’t Get “Over”

“Over You” is something you’ll never forget once you’ve heard it. It perfectly captures the all-too-familiar feeling of how much it hurts to lose a loved one, rather it be a parent, child, sibling, lover, or friend.

The emotional song was penned by Blake Shelton and Miranda Lambert, who were together at the time. Blake wrote it in memory of his late brother Richie, who lost his life in car crash when he was 24 years old.

Even though the song captured his feelings, Blake couldn’t bring himself to sing it. He told Miranda he wanted her to have it, so she recorded it and released it in 2012.

The song resonated with audiences far and wide, and claimed the top spot on the country charts in both the U.S. and Canada. It was also a crossover success, peaking as high as the 35th spot on the Billboard Top 100.

Others Sing It – Blake Shies From it

Just months after it was originally released, Blake’s Voice team member Cassadee Pope placed her own spin on the song during the week that the top ten contestants competed. Her powerful performance touched fans across the country, who sent her recording to the third spot on the Hot Country Songs chart and the 25th place on the Top 100.

She went on to win the show.

While Miranda, Cassadee, and others have performed “Over You” many times through the years, Blake has continuously shied away from the song. Though he has performed it on a few rare occasions, and when he has, the moment has always been an powerful one.

So you can imagine how much of an impact Blake left on a Grand Ole Opry audience who watched him dust off the song in honor of another someone he lost in life. That someone was his good friend and country music star, Troy Gentry.

Country music stars honored the life of Troy Gentry during a sold-out show at the @opry last night https://t.co/7ZTo6xiZQD

Troy passed away on September 8, 2017 after he was involved in a helicopter crash. He and his Montgomery Gentry bandmate, Eddie Montgomery, were supposed to perform later that night.

The country music community was devastated over Troy’s loss. Emotional messages flooded social media, with one of the most powerful coming from Blake.

When Troy’s wife Angie wanted to gather some of his friends to host a charity benefit in his honor, she knew that Blake was a go-to person. He was more than willing to help, and offered to co-host the event, which took place on January 9, 2019.

But no one had any idea that Blake also planned to sing during the gathering, since he wasn’t billed as a performer with the likes of Rascal Flatts, Craig Morgan, and Dierks Bentley.

No One Saw This Coming

And when Blake sat down to sing with nothing but his acoustic guitar in hand, surely no one expected that he’d gather up the courage to sing “Over You.”

But that’s exactly what Blake did, baring his emotions in front of the entire crowd as he honored his lost friend through the song he wrote to honor his lost brother.

We don’t believe there was a single dry eye in that house once he finished singing.

Thankfully, the Opry captured Blake’s performance on film, and shared a snippet of it on social media. Now you can witness the chilling moment that Blake honored Troy with the song he rarely finds the strength to sing.

Moments like these are ones that go down in the country music history books forever.