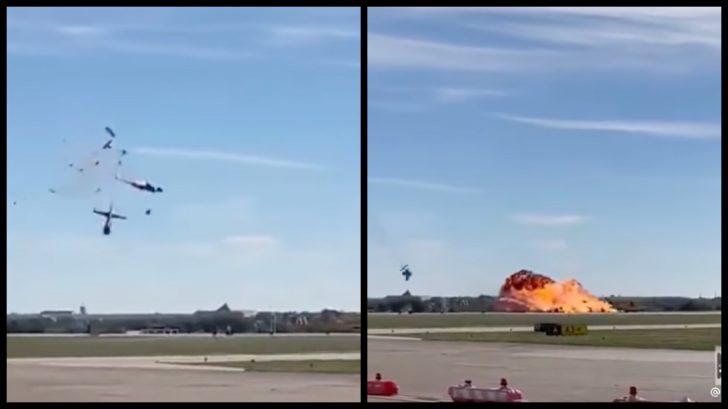 Six people are confirmed dead after a tragic mid-air collision during the Wings Over Dallas Airshow on Saturday (November 12).

The accident took place at the Dallas Executive Airport when two World War II-era military planes crashed while flying during the airshow. Footage captured by spectators show a Boeing B-17 Flying Fortress and a Bell P-63 Kingcobra collide before crashing to the ground and bursting into flames.

More than 40 fire and rescue units responded to the scene, but due to the intensity of the crash, the fact that neither plane was fit with ejection seats and the planes’ low altitude, hope that survivors would be found was slim. The Dallas County Medical Examiner confirmed to CNN that all six lives on board the planes were lost.

Among those killed are retired American Airlines pilots and former Allied Pilots Association members Terry Barker and Len Root who were a part of the crew on the B-17 Flying Fortress.

We are saddened to report that former APA members CA Terry Barker and CA Len Root were among the crewmembers lost on B-17 Flying Fortress during the Wings Over Dallas airshow today. Our hearts go out to their families, friends, and colleagues past and present.

Major Curtis J. Rowe, a 30-year veteran of the Ohio Wing Civil Air Patrol, was also among those killed in the collision, Colonel Pete Bowden, the agency’s commander, reported.

Other victims’ names have yet to be released. The accident is currently under investigation by the FAA and National Transportation Safety Board.

Our thoughts and prayers continue to be with the families and loved ones of the victims.