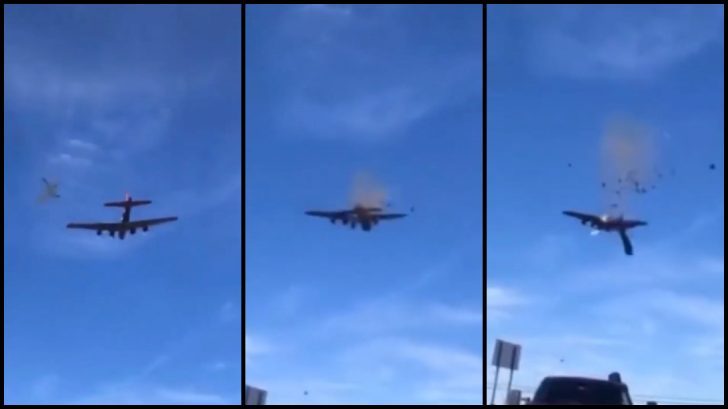 It was a tragic day at the Wings Over Dallas Airshow as two WWII-era plane crashed during their performance on Saturday (November 12).

According to authorities, a Boeing B-17 Flying Fortress and a Bell P-63 Kingcobra from Houston were flying when they collided and crashed to the ground at the Dallas Executive Airport.

“It’s like literally as you looked up you saw the big plane and then you saw one of the little planes split off from the three and then as soon as it split off it’s like they just collided into each other and the little plane split the big plane in half. I honestly can’t believe that we witnessed that, like just standing here underneath it.” said witness Morgan Curry who saw the crash happen. “We were all just standing there like ‘what just happened?'”

There is currently no information on the fate of the pilots or any other crew that may have been onboard. The incident is under investigation by the FAA and National Transportation Safety Board.

According to Brittanica, the B-17 we a 4-engined bomber ordered by the Army Air Corps in 1934. The heavy bomber was manufactured by Boeing and conducted high-altitude bombings over Europe during WWII. The Kingcobra is a U.S. fighter plane that was used mostly by Soviet forces during the war.

Spectators captured Saturday’s horrifying crash on video that can be seen below.