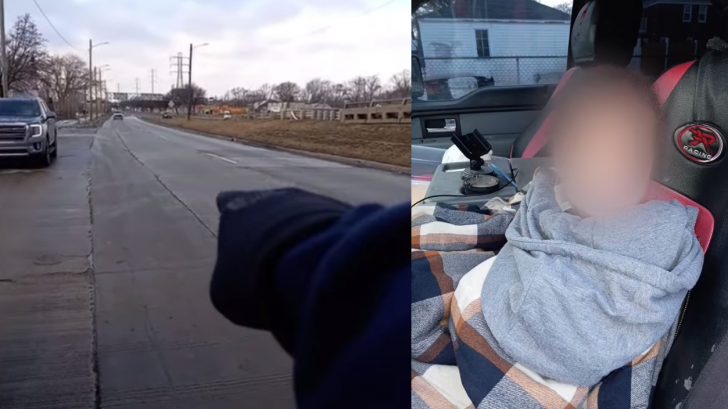 Detroit resident Robert Jackson III was on the clock working as a Doordash delivery man when he spotted a toddler walking in the middle of the road in nothing but a diaper and socks.

He said the incident took place on January 9th around 11am on Detroit’s famous 8 Mile Road. Once he noticed the kid was alone, he pulled over his vehicle and stopped and got out to check on the kid.

The poor baby’s body was stiff from the freezing cold, so he wrapped him up in his coat and put him inside his car to keep him warm.

“He was standing in the middle of 8 Mile like this,” Jackson said. “(He) was shaking, his hands and his lips were purple and his fingers were purple.”

The toddler was so young that he couldn’t speak, barely knew any words, and couldn’t communicate where he lived.

It was about 38 degrees, six degrees away from the water turning into ice, which is warm compared to the past few days in the region. But with the wind conditions blowing so hard, it was even colder.

Robert waved down another driver and asked them to call 911 while he waited for them to show up. While he waited, he filmed a video on his phone and comforted the child as he warmed up.

Once police arrived on the scene, they soon figured out that the baby came from an apartment only a block away. The baby was apparently being watched by a 16-year-old babysitter who wasn’t paying enough attention and the baby escaped outside on his own.

Watch The Video Report Below

That’s not the first time a toddler has been saved from being outside in the cold weather. Remember when a wild bear kept a toddler safe after the child wandered off a property and into the woods for two days in the cold, heavy rain? Click here to get the full scoop on that story.