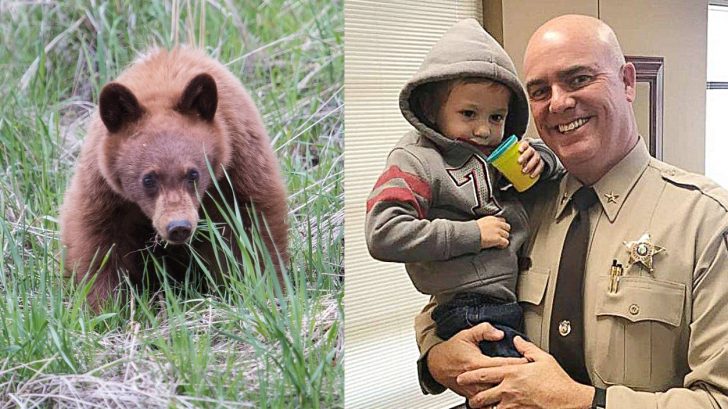 The incident happened in 2019 to a 3-year-old boy named Casey Hathaway. The boy was at his grandmother’s house and was playing outside when he wandered off into the nearby woods. When his parents went to check on him, he was gone!

The temperature at the time was freezing outside and the boy’s family quickly called the authorities to ask for help in finding him. The local police, local residents, wildlife officers, and even the U.S. Marines were deployed to search for the missing child.

For two full days, the boy was lost in the woods, the cold, the heavy rain, and was presumably all alone. It wasn’t until a neighbor was walking her dog and heard the boy crying about 40-50 yards away from the road, that he was found.

After being examined by police and his parents, he only had a few scrapes and bruises. The boy told his parents that he was able to stay warm because a bear spent time with him and looked after him until he was found.

“He said he hung out with a bear for two days,” his aunt, Breanna Hathaway said, according to My Modern Met. “God sent him a friend to keep him safe. God is a good God. Miracles do happen.”

There was never any proof that what the boy was saying was true, but it’s also hard to believe that he was able to withstand the weather conditions all on his own.

This story may sound bizarre, but it’s not the first time a story like this has been reported. A New York Times report from 1888 said that a 2-year-old girl was found in a valley and claimed that a bear kept her safe and warm while she was lost.

Another report came out of 1995 when a 2-year-old girl named Ida Mae Curtis was lost in the Kootenai National Forest in Montana and was “comforted by a bear.”

Watch The Interview About The 2019 Incident Below