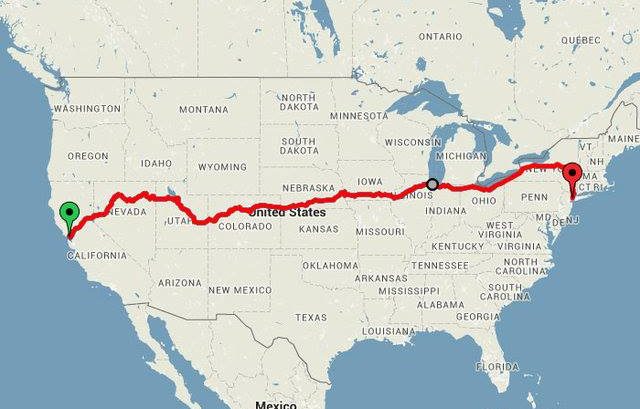 Have you ever wanted to see the most scenic spots in the United States but thought you didn’t have the money? Well we’ve got some great news for you – now you can and at a bargain of a price.

Blogger Derek Low recently took the trek to show us how it is done. The best part, he didn’t have to get into a car once. Instead, Low decided to lean back and soak in all of the scenery while riding by train.

Low boasts that the 3,400-mile trip can cost as little as $186 and only it only takes 4 days to complete! You might be skeptical at first, but his trip went through the wide-open countryside of the U.S. as he traveled from San Francisco, CA to New York City, NY.

Rebooting my Instagram profile @dereklow. You'll be seeing more photos of me pretending to have fun.

While taking the trip, he got to see several states including California, Nevada, Utah, Colorado, Nebraska, Iowa, Illinois, Indiana, Ohio, Pennsylvania, and New York. He was able to stop off in a few places and walk around, as well as take some amazing photos of historic places along the way.

Trains are still a great way to travel…

Trains came to the U.S. during years of expansion and industry. They helped connect military, cargo, and people with each other across the country. As time passed – the once luxury became less and less of a desired means of travel. As planes and automobiles became commercialized, trains became an afterthought for most Americans but the network of trainways is still in place today.

From San Francisco to New York, you can take two famous train routes – the California Zephyr and the Lakeshore Limited that will take you through some of the most beautiful places you will ever see.

I’m finishing out my last few hours aboard @amtrak’s California Zephyr, a train that takes you from San Francisco to Chicago (or the reverse). ? . . What a ride this has been! I’m answering all questions about duration, cost, food, hopping on and off, etc. on my IG story now so check it out! ?

By taking a train, you get to see all those “flyover” states and learn the history behind them while taking in all the beautiful scenery they offer. You can take sleeper trains, or sit in the gally of a train and have a drink while you absorb everything the United States has to offer in the course of your trip.

But not for long.

Unfortunately, we might not have this opportunity for much longer. Part of the president’s budget cuts includes eliminating funding for train routes like the California Zephyr and the Lakeshore Limited. According to Popular Mechanics, the reasoning is that the lines are not practical to keep going so if you want to take this once-in-a-lifetime trip, you better hop on the train fast! So grab your bag and pack the essentials to check out all the amazing scenery the U.S. has to offer.

You can read Derek Low’s in-depth review of his trip (food included) and even have him plan a trip for you by clicking here. And don’t forget to check out the video below and let us know what state you want to visit the most in the comments!

You can see the most beautiful sights in America on this train trip — and it's only $219! (via Country Living Magazine) See more: http://ghkp.us/IOcEab3