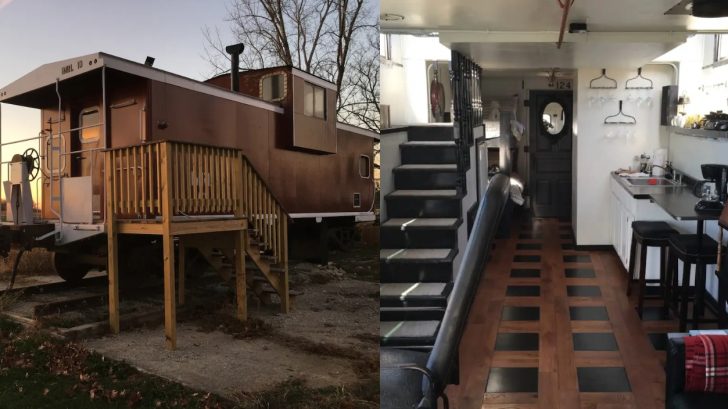 Jim Dotzenrod and his daughter Danielle from Iowa built one of the coolest tiny homes out of an old train caboose and people are paying them to spend the night in it.

The 65-year-old purchased the train caboose in 2016 at a scrapyard after driving by a row of train cabooses in Decorah, Iowa several times.

“By a town 30 miles north of us, there’s a line of cabooses along the road a guy bought in an investment,” Jim told Insider. “And I thought, ‘Well, I wonder what you could use one of them for?’ Then I thought of an Airbnb.”

The owner of the 10 cabooses wasn’t wanting to sell any of them but that was okay, Jim’s daughter Danielle started looking for them in other places and found one.

“My daughter’s partner at the time told me there was one 30 miles away at a salvage recycling yard,” Jim said.

He then paid $2,000 to have it transported to his home where they placed it on real railroad tracks that Jim acquired.

“They had two big excavators at the salvage yard,” Jim said. “They put straps on the caboose, and they lifted it onto the semi I had hired. It only took an hour to take it off of the semi and set it on the track.”

It cost him around $4,000 to go from start to finish with renovating the caboose into a comfortable home and the first thing he got started with was gutting everything on the inside.

“I had to get the iron out of there, and after I gutted it I had to power wash it to get that diesel-fuel smell out,” Jim said. “It was strong — it was just that lingering odor of diesel fuel.”

He finished it off with some air freshener and then got started on building the interior.

When he and Danielle were finished, the caboose had two sleeping arrangements: a queen-sized bed upstairs and a bunk-bed that can hold up to four people at the rear of the caboose.

It also came with a kitchen that was equipped with a microwave, a refrigerator, a double-burner for cooking, and barware supplies for cocktails.

There is also a bathroom that has a beautiful tile shower that Jim cut out and Danielle placed in the caboose.

It also has a living room with an electric fireplace where the original conductor’s chairs are, which can swivel, and they can face the living room window showing a horse pasture in the backyard.

Jim said it took him about 300 hours to build. For six months, he worked on it during the night and on weekends since he already had a full-time job he was working during the week.

“My dad can do anything he sets his mind to — like, absolutely anything — but my dad is so low maintenance himself,” Danielle, the owner of Dotzy’s Restaurant and Saloon, said. “So when we built this together it was a good combo, because he could build whatever and have me nudging him like, ‘Hey, let’s make this as cool as we can.'”

Jim added: “I thought it would work as far as generating income. After my regular job, I just stayed at it at night and on weekends to get it done.”

Danielle, who is also the owner of Dotzy’s Restaurant and Saloon, said that once her dad got all the large items in the caboose, she focused on decorating it and giving it that “home-feeling” and cozy touch.

“We wanted it to be nice but still feel like you’re in a caboose,” Danielle said. “I think that’s something we pride ourselves on. There’s a few other cabooses out there, but sometimes when you’re in it you don’t even really realize it’s a caboose.”

Jim agreed, adding: “The outside, of course, looks like a caboose, but you have to keep just a little bit of the novelty of it in there, so visitors know what it was like back in the day.”

It was finally completed in November of 2016 and they placed it on Airbnb where they immediately started generating income from it. The property is now listed as the CR Station Train Caboose on Airbnb and there is a minimum stay of two nights that’ll run you about $300 total.

Danielle said that the Airbnb is almost always booked during summertime by families who are hoping to escape city life. The deck in the back allows them to sit outside and enjoy the rural scene which is something most of the guests are not used to.

“I’d say 90% of reviews give a shout-out to the horses,” Danielle said.

In addition to the caboose, guests can also travel into town and spend time on activities like kayaking on the Upper Iowa River, hiking an 11-mile trail, taking lessons at a local shooting range, or visiting Decorah’s award-winning Toppling Goliath Brewery.

On top of all that, Jim also offers to take guests on a horse-drawn carriage ride.

Danielle said, “When we see guests sitting on the deck having a cocktail during sunset or watching the horses in the pasture, it feels nice to offer city people that chance. It’s something that we country people probably take for granted, but it’s something that they really appreciate.”

See More Photos Of The Caboose Tiny Home Below

See A Video Tour Below Of Another Caboose Tiny Home Below