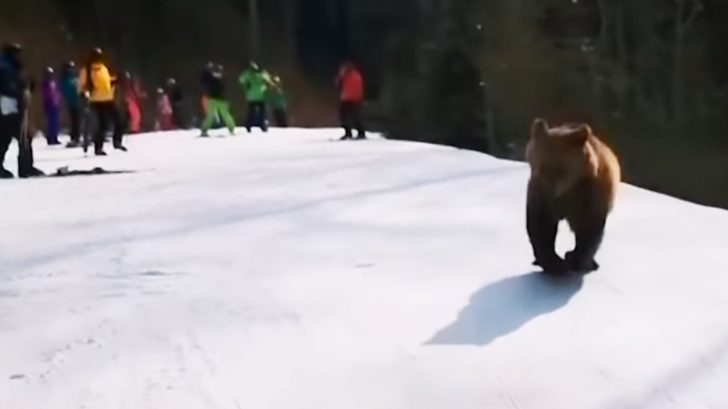 A skier at a resort in central Romania was chased down a ski slope by a bear as he and a group of skiers were making their way down the slope.

According to Romanian news outlet DiGi24, the bear ventured out of the woods onto the slope as a group of skiers were making their way down the mountain. The group stopped once they saw the bear but more and more people kept coming. In a brave yet dangerous attempt to save the group from the bear, the instructor got the bear’s attention and lured it into chasing him down the slope away from the group.

The bear took off after the man and got up to a full sprint at one point. Incredible footage was taken of the bear as it chased the man down the slope, until something else caught its attention and it stopped. The bear ended up getting distracted and walked back to the forest as the ski instructor made a getaway. Check out the footage below.

The Minister of Environment, Tanczos Barna said the man’s gesture was heroic but very dangerous. He also raised the concern that Romania has the largest bear population in the European Union and in the past five or six years the country has withdrawn from managing the population and cases of encounters and attacks have been steadily growing.

“We have to present the real situation, we have the courage to talk about the problem. We have to find solutions to keep the natural habitat of wild animals as intact as possible,” Tanczos said, translated on DiGi24. “I think the balance must be created.”

Just less than a month ago Country Rebel reported on a bear chasing a skier down a slope in central Romania and video footage of that was taken by onlookers riding the ski-lift up the mountain. You can watch footage of that below!