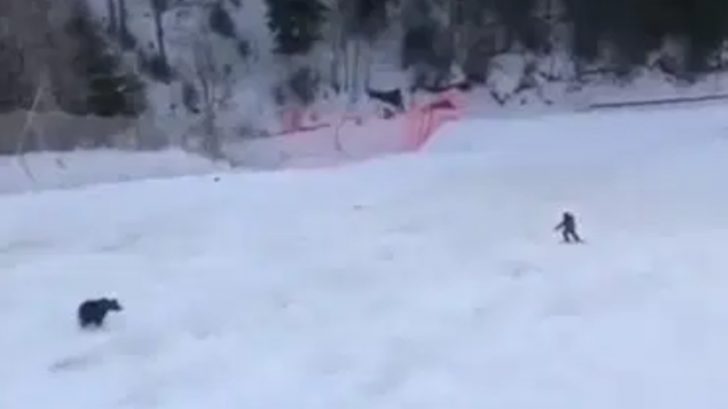 A frightening video was taken over the weekend by some skiers in a chairlift showing a big brown bear chasing a skier down a mountain slope of a ski resort.

It happened on a ski slope in Predeal, Romania. Skiers riding in the chairlift at the resort filmed the entire event as it unfolded before their very eyes. They can be heard in the video trying to yell to warn the man skiing that the bear was charging down the mountain after him.

“Faster, faster! Come on, the bear is chasing you! Faster! God forbid, don’t look back!” someone shouted, according to Newsweek.

The bear continued to chase him at a frightening pace but the skier decided to do something very smart. In an attempt to distract the bear and save his own life, he decided to throw his backpack down to the ground. It worked!

The bear, running at full speed, took a turn for the bag laying in the snow while the skier escaped down the slope to live another day. The onlookers continued to film as the bear investigated the bag. Ion Zaharia, a spokesperson for the police said it was very smart of the skier to throw down their bag.