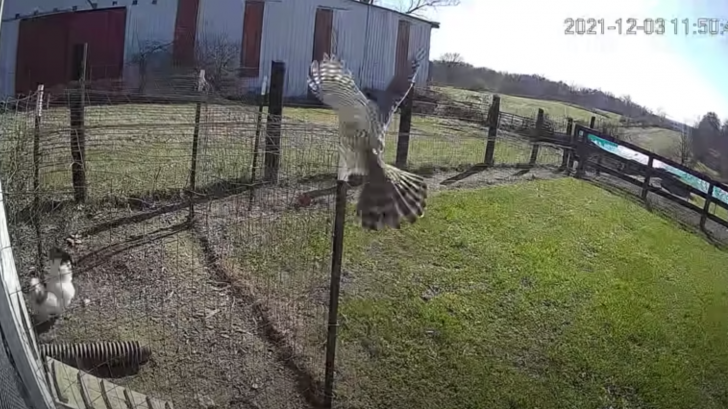 A heroic moment was caught on video at Sunset Farm after a rooster protected a hen from a hawk that flew down and attacked it.

Sunset Farm shared the video to YouTube saying, “My Rooster did his job today by defending the hens from a hawk that slipped through a hole in my fence which has now been patched.”

In the video, it showed the rooster stepping outside of the chicken coop to join his mate, the hen, who was also outside the coop soaking in some sun rays, but still inside an area fenced-in with chicken wire.

As they enjoyed their time together, the rooster must have spotted the hawk because he sent out a signal of danger by quickly dashing back into the coop, leading the way for the hen to follow.

However, the hen wasn’t able to follow him in a timely manner because she got flustered, ended up running onto the fence, and then not making it back into the coop with the rooster.

A hawk is then seen walking in the grass into the frame and then jumping onto the fence, finding a hole to get inside, and then pouncing on the panicking chicken.

The Hawk must have thought it was going to be an easy meal, however, the rooster wasn’t about to let his lady go down that easy. Like a kung-fu master, the rooster did a flying kick as it jumped out of the coop and landed on the hawk.

The rooster then proceeded to kick and peck at the intruder until the hawk got back to its feet and managed to get into the air, find an escape hole, and then fly away.

He chased the hawk until it leaves and then watches from the coop like a bouncer guarding the door of his establishment. The video footage is shocking!

Also, remember the time another hawk tried to kill a different chicken and a goat and rooster stopped it from happening! Click here to see that video and hear the full story!