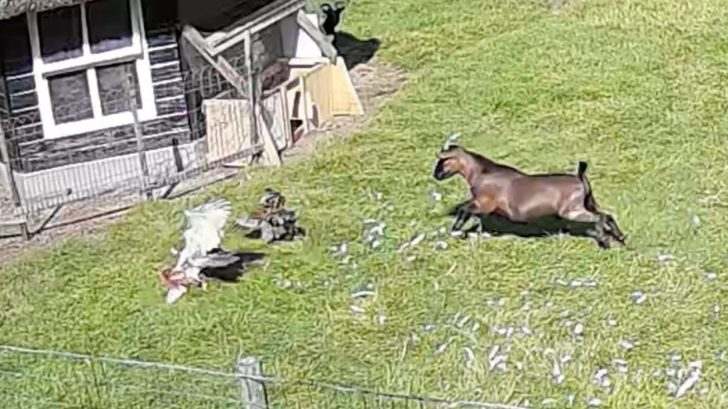 59-year-old Farmer Jaap Beets from Gelderland, Netherlands shared footage taken from a security camera overlooking his animal pen and it showed a hawk swooping down to attack his chicken on Sept. 5.

Within seconds, the other farm animals stepped in and saved its life.

The footage showed the chicken standing in the middle of the pen minding its own business when the hawk decided to fly down and grab it with its talons.

The chicken tried to run away but the hawk was way too fast and eventually landed on its back causing its feathers to fly everywhere. A few seconds after that, the rooster comes running across the pen and started trying to get the hawk off the chicken.

You could see a goat in the pen watching at a distance and once it realized there was a full-scale attack in progress, it ran over to join the fight. The goat headbutted the hawk multiple times in an attempt to stop the attack and it worked.

The goat was able to separate them and the chicken was able to escape and retreat to the chicken coop. The hawk also escaped the goat who was going to take it out if it stayed around any longer.

“I was so proud of the rooster and the goat jumping in to defend our chicken,” the farmer said, according to New York Post. “I was also very relieved that the chicken survived.”

After the hawk flew off, the goat looked around to make sure the chicken was alright. The farmer said that the other animals comforted the chicken and licked her wounds. He said that the chicken only received minor injuries but is going to make a fast recovery.

“That goat, though, what a hero. He deserves a whole bale of alfalfa to himself,” one person wrote in the comments of the video.

This was not the first time this has happened to Jaap’s chickens, he said. His goats and roosters saved his chickens three times, including the recent attack.

“In the seven years I have lived here, it’s the third attack on our chickens,” he said. “This was the second from a goshawk and the other was a buzzard.”

Watch Farm Animals Save Chicken From Hawk Below