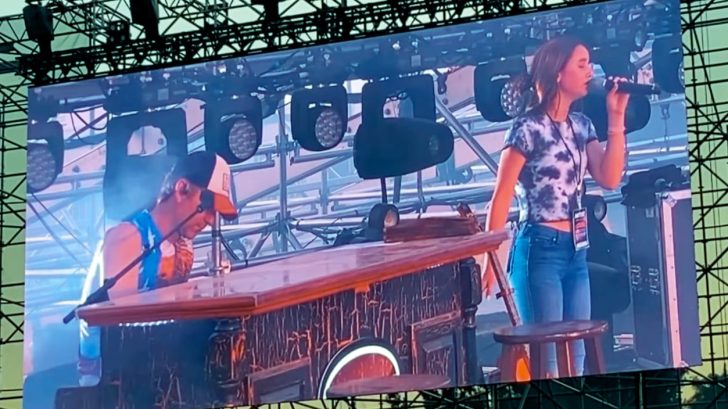 Craig Campbell‘s baby girl is following in his musical footsteps.

Known for songs such as “Outskirts of Heaven” and “Family Man,” Craig is also a father to two daughters, Preslee and Kinni. Preslee has shown an interest in music from a young age, and has proven to have the talent as well.

Preslee was only six years old when she performed the National Anthem solo during a Fourth of July celebration at Heinz Field in Pittburgh.

Three years later, at the age of nine, Preslee wrote her first original song. She has also performed several duets with her father, which his fans love to see.

Now 13 years old, Preslee is blossoming as a singer and musician. During one of her dad’s concerts over the 4th of July weekend, Preslee joined him on stage to sing “Shallow” from A Star Is Born. The song was performed by Bradley Cooper and Lady Gaga in the movie.

“Shallow” is one of the most highly awarded songs to be released in the past few years. Among its accolades include the Academy Award for Best Original Song and two Grammys.

Since “Shallow” was so popular, it has been covered numerous times. Anyone who wishes to perform the song these days has to go the extra mile to make their rendition of the song stand out. That’s exactly what Preslee Campbell did.

Craig shared a video of his daughter’s live performance on social media. He said it was “Proud dad moment” to watch 13-year-old Preslee take to the stage and sing her heart out.

Normally, Craig sings “Shallow” with Preslee as a duet. He sings Bradley Cooper’s part while Preslee performs the part sung by Lady Gaga. But they only had one microphone, so Preslee sang solo while he backed her up on the piano.

Tune in to the video below to watch Preslee’s outstanding rendition of “Shallow.”

Watching her sing, it’s hard to believe she’s only 13 years old! She has confidence beyond her years.