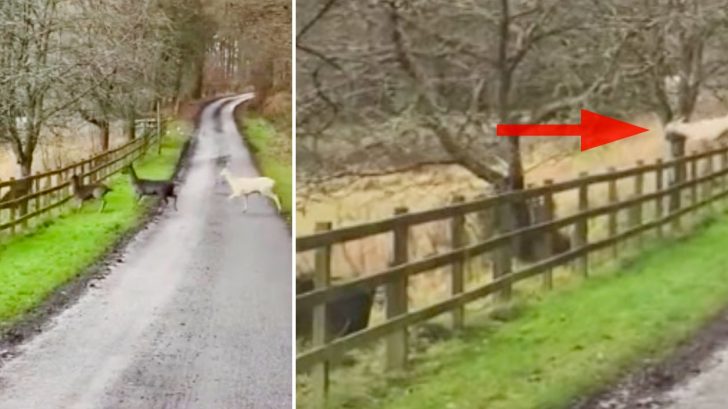 So whenever someone sees an albino deer, they rush to take a video or picture. Back in November 2020, one Wisconsin resident named Tracy Weese amazed thousands with a pair of stunning photos she took of an albino deer who wandered into her backyard.

She dubbed the albino buck “His Majesty” and was clearly in awe of his beauty.

A motorist named Paul Traynor was driving down a thin dirt road in a rural area in Indiana when he came across a herd of deer. He stopped to film the group, which included one albino member.

Traynor filmed the deer crossing the road before they leapt over a fence and disappeared into a field. Of course Traynor focused on the albino deer the most, and kept the camera rolling as it followed the rest of the deer over the fence before running away.

This video was shared with the Indiana news station WSBT-TV, who captioned it, “An Albino deer jumps over a fence with the rest of the group.”

Traynor didn’t get too close to the herd, but he got close enough for you to be able to appreciate the beauty of the rare albino deer in the group. Check out the video below.

Have you ever seen an albino deer before? They are such magnificent creatures!