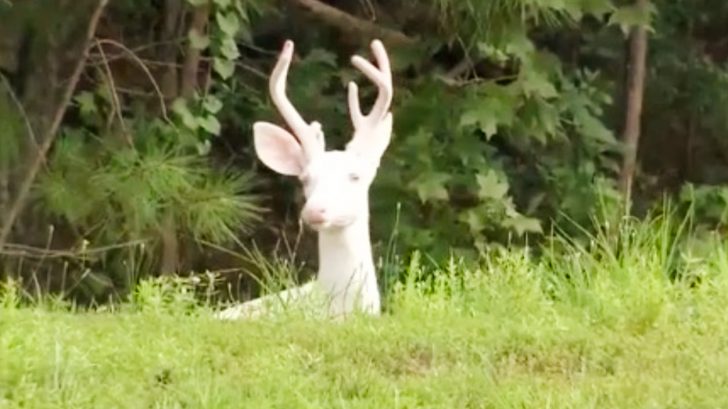 It’s not at all uncommon to see deer in your neighborhood, even if your neighborhood happens to be a suburban area like Holly Springs, North Carolina. But among the herd of ordinary deer in the area, there’s one extraordinary animal.

There’s one particular deer that has recently been turning heads in Holly Springs. Its rise to fame was so quick, local news station WRAL sent a reporter out to one of the spots where it was previously seen.

While the reporter himself did not get the chance to set his eyes on the deer, his colleague managed to film it on July 15, 2019.

So what makes this deer so special that it has a news crew trying to track it down? It turns out that it’s a rare, pure white deer, or “albino.”

Wildlife biologist Fayln Owens, who was interviewed by the news station, says the odds of seeing an albino deer are 1 in 30,000. So those who have seen the bright white buck hanging around Holly Springs can consider themselves lucky.

Though one resident believes he has actually seen two albino deer in the same area.The resident, named Jason Fowler, thought he saw an albino doe in 2018, and believes that doe is the mother of the buck that was spotted in 2019.

There’s no telling if there truly are two albino deer in Holly Springs, or if Fowler actually saw the same deer and just saw it before it had antlers. Regardless, even a singular albino deer sighting is something worth reporting on!

You can watch WRAL’s full report about the albino buck in Holly Springs by tuning in to the video below.

What about y’all…have you ever seen an albino deer in person before? If so, then you are one of just a few people who have!