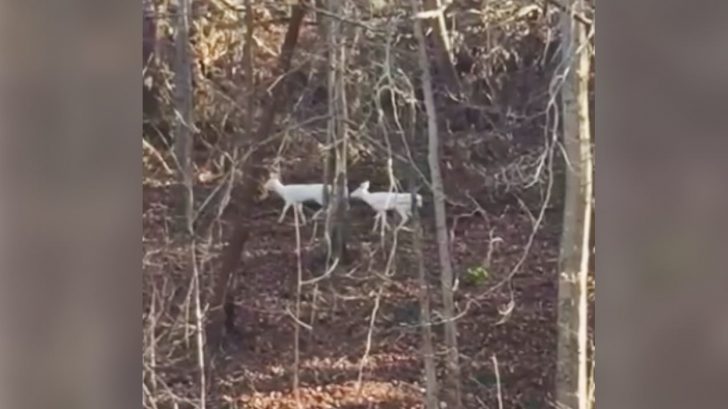 Have you ever seen an albino deer before? If so, you can consider yourself lucky, because albino deer aren’t common at all.

When an albino buck was seen in Holly Springs, North Carolina in 2019, wildlife biologist Fayln Owens explained the odds of seeing an albino deer. She said only 1 in every 30,000 deer are albino.

Mossy Oak explains what it means for a deer to be considered albino:

“By definition, an albino deer is totally absent of body pigment and is solid white with pink eyes, nose, and hooves.”

“Since albinism and piebaldism are recessive traits, both parents must carry the trait to have albino or piebald offspring. The genes responsible for piebald and albino deer are not dominant and oftentimes the deer carrying these genes are biologically inferior.”

One man named Carter Messer had the opportunity to witness this infrequent sight in January 2021.

Messer filmed two albino deer traveling together with another deer in a wooded area. The deer were far from were Messer stood, but he still managed to get some stunning footage.

He assumed the two deer were twins, telling WJAC-TV News and other outlets, “I’ve seen albino deer before but never seen twins.”

Messer has since taken down his video about the deer, but you can watch a video about another albino deer below.

Have you ever seen multiple albino deer at the same time? If so, you’re one of few people who can say that!