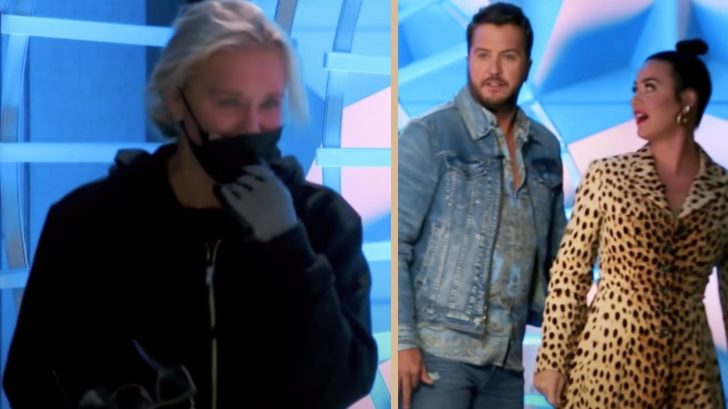 Luke Bryan and his wife Caroline share the same sense of humor. They love playing pranks on each other, so much so that they celebrate 12 Days of “Pranksmas” around the holiday season.

One of Luke’s best pranks was when drove behind Caroline while she was riding her bike. He honked the horn at her, and the horn sounded like a train, which made it extra terrifying. Caroline was so scared she fell off of her bike!

Luke recently re-shared the video of him pulling this prank on Caroline and wrote, “Y’all remember the time I scared the hell out of @linabryan3? Just wait till you see her revenge during #americanidol tonight!”

Caroline certainly got her revenge!

American Idol uploaded a clip showing Luke and his fellow judges waiting for a new audition to start. A crew member wearing glasses, a black mask, and a hat came in the room. They started cleaning off the piano but in a super chaotic manner.

Then the singer came out for her audition and started to sing Maren Morris‘s “My Church.” However, her audition was interrupted by the same noisy crew member who was backstage crunching a chip bag. Katy Perry got angry and went backstage to take the chip bag from the annoying stagehand.

This made the crew member upset. They stormed out on stage and snatched the chips away from Katy. The judges were extremely aggravated at this point, and Lionel Richie called for someone to kick the troublemaker out.

That’s when Katy went over to the crew member and yanked the hat off their head. In doing so she revealed that the rude stagehand was none other than Luke’s wife Caroline!

A short clip played showing how Caroline orchestrated her prank.

The singer who auditioned was actually a fake contestant, and she was in on the scheme! So was Katy, who Caroline consulted with backstage before putting her plan in action. Lionel was actually just as clueless as Luke and maintained he didn’t know a thing about Caroline’s prank.

Luke got a good laugh out of the whole thing, and you surely will too when you watch Caroline’s prank in the video below. She got him good!