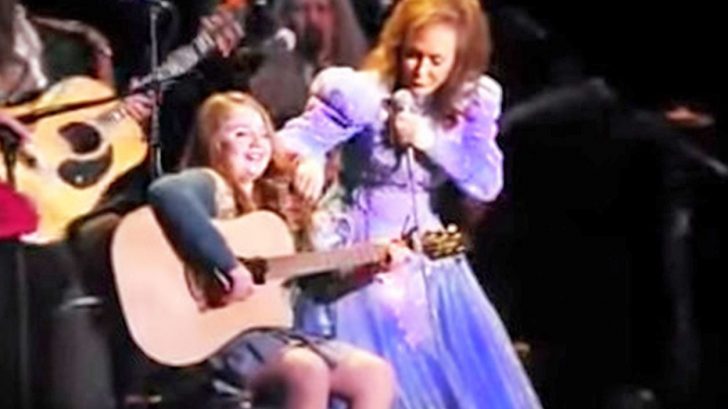 Loretta Lynn has always been one to showcase her talented children to the world during her beloved shows and iconic events. The legendary singer is gracious not only to her children but also her grandchildren!

Happy birthday, Emmy. You know I love you!

At one concert in 2012, she brought up her 11-year-old granddaughter to have her moment in the spotlight. This young girl by the name of Emmy Rose has the same infectious personality as her iconic grandmother and she has clearly been gifted with the same sensational vocal talent.

Keeping It in the Family.. Emmy is Loretta's Youngest Granddaughter she will be opening up for Kacey Musgraves Friday…

Emmy Rose took to the stage beside Lynn, who introduced the girl and her mother, one of the legend’s twin daughters. Before strumming her guitar, Lynn’s granddaughter told the audience she was about to sing the heartbreaking song “If I Die Young” by The Band Perry.

As Emmy Rose began to sing, the audience erupted in cheer and applause, praising the youngster’s talent.

Progressing through the song, Lynn watched her granddaughter, beaming with pride and sheer appreciation for the gift her granddaughter possesses. Listen to the beautiful performance and tell us what you think!