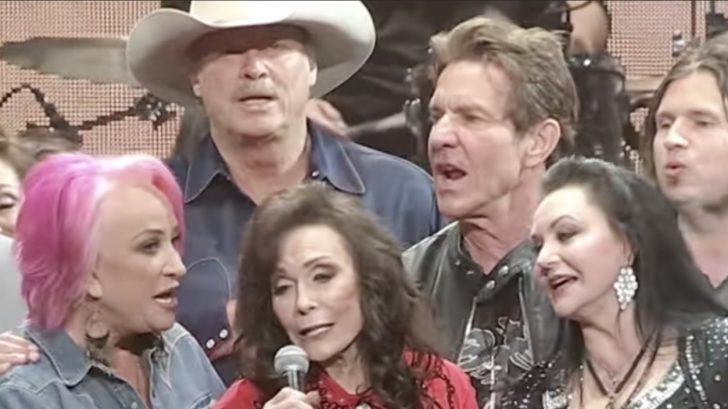 The world lost a legend on Tuesday, October 4th when Loretta Lynn passed away. Her family made the announcement on social media, saying, “Our precious mom, Loretta Lynn, passed away peacefully this morning, October 4th, in her sleep at home at her beloved ranch in Hurricane Mills. The family has asked for privacy during this time, as they grieve. An announcement regarding a memorial will be forthcoming in a public announcement.”

A statement from the family of Loretta Lynn.

"Our precious mom, Loretta Lynn, passed away peacefully this morning, October 4th, in her sleep at home at her beloved ranch in Hurricane Mills.” The family of Loretta Lynn.

Her death comes as a shock to the country music world, seeing as we weren’t aware of any current health issues, though she was 90 years old. Lynn lived such an incredible life, from being married at 15 to have four children before even releasing her first single, to just recently celebrating 60 years as a Grand Ole Opry member.

In May 2017, she suffered a stroke which left her hospitalized and unable to perform full concerts. Her final full concert was on April 22, 2017 at the Tarrytown Music Hall, which is a small theater just outside New York City.

After her stroke, Loretta returned to the stage one more time…for her 87th birthday celebration in 2019. While the show, which took place at the Bridgestone Arena, was filled with tribute performances as she looked on from the side of the stage, the country legend did join everyone for a rousing rendition of “Coal Miner’s Daughter” to close out the show.

Most everyone who participated in the birthday show was on stage at this point including Alan Jackson, Martina McBride, Tanya Tucker, Brandi Carlile, Crystal Gayle and many more. Crystal, Loretta’s youngest sister, sang lead for the beginning of the song, but about 40 seconds in, Loretta said, “Let me have that damn mic!”

She started singing loud and proud and the audience went nuts. It’s such a fun video, and it was so nice to hear her sing again.

Loretta will be dearly missed. Watch her final performance in the video below.