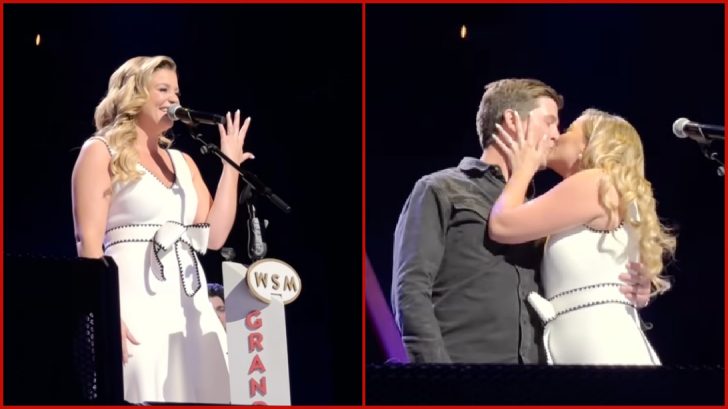 Congratulations are in order for Lauren Alaina! The country songstress is engaged to her boyfriend of 2 1/2 years, Cam Arnold.

Lauren Alaina shared the news while on stage at the Grand Ole Opry Saturday (November 19), saying:

“I was welcomed into this family and it was a dream of mine…as long as I can remember. I didn’t think this year could get any better. And, yesterday I got asked into another family,” Alaina said as she held up her hand to show the crowd her ring.

She added that after Cam proposed, she told him that he had to join her on stage at the Opry. “I told him he had to come out here and we had to get a picture…we’re doing it because this is the circle and I’m going to hold my hand up and do the thing. Make some noise for my future husband everybody!”

“I have an actual, real-life boyfriend,” Alaina said. “We’ve been together a year-and-a-half, so it’s not like I just started dating him. I’ve just never posted about him or anything because he’s just mine. He’s a business guy and goes to work every day in a suit.”

In an interview with PEOPLE, Lauren revealed that her fiance, a partner at a Nashville insurance company, is happy being behind-the-scenes, but he made an exception to join her on the Opry stage to share their big news.

“He did not want to do that! He likes to be in the shadows. He was like, ‘You’re not making me come out there’ and I said, ‘You are not not getting a picture in the circle. So — we negotiated and he came out for the picture,” the 28-year-old singer said. “This is the most important place in the world to me and he’s the most important person to me, so it was pretty amazing to put ’em together.”

Lauren also shared the news on Instagram along with more photos of her and her husband-to-be.

“BRIDE be dang’d, y’all. My best friend, @arnold.cam, asked me to marry him, and I announced it at my favorite place in the world, @opry. I didn’t know happiness and excitement like this existed,” Alaina wrote. “I can’t wait to be Mrs. Cameron Scott Arnold.”