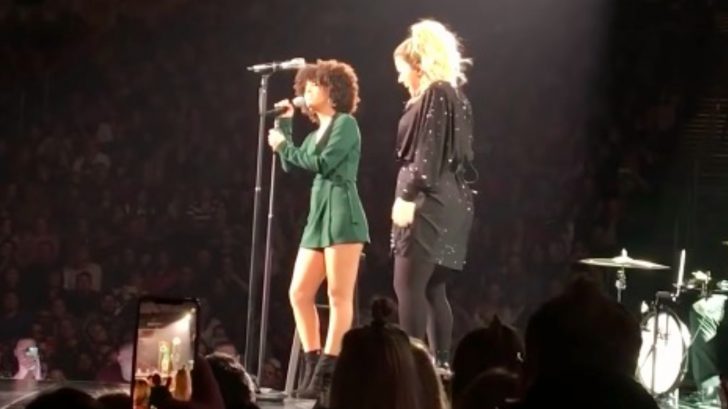 The Voice Season Of Controversies

Season 15 of The Voice will forever be known as the season of controversies. Of course, with the biggest being sparked when coach Adam Levine defended his team member Reagan Strange after she was unable to compete in the Instant Save round.

Even though Levine had another contestant, DeAndre Nico, in the Instant Save as well, he devoted his time to speaking for Strange. She ended up making it through, while Nico was eliminated.

Fans felt Levine had thrown Nico under the bus, and were not happy with the coach or Strange.

Public Service Announcement: Future #TheVoice contestants (especially POC), don’t choose this guy as your coach, unless he’s the only chair available. He’s a careless and embarrassing idiot. #DeAndre deserved better than to be publicly humiliated. So gross. pic.twitter.com/meUwUNSwlb

But if it hadn’t been for that whole debacle, a different coach’s team member would have been the most controversial.

A Shaky Introduction Of New Segment

During Season 15, the show introduced a new, online segment called the Comeback Stage. Led by the series’ first-ever fifth coach, country singer Kelsea Ballerini, the segment showcased the talents of select contestants who didn’t turn a chair during blind auditions.

Under Ballerini’s guidance, the artists refined their voices and then competed for a chance to take part in the season’s first Instant Save performance during a live show. The winner of that Instant Save would automatically get to move on into the Top 13.

The contestant who won that Instant Save round was Lynnea Moorer, and she selected Kelly Clarkson as her coach. She had to compete for an Instant Save the following week, and won once more since she received the highest number of votes.

Talk about a comeback! ? @lynnea.m won #VoiceComeback and joined #TheVoice Top 13 after this powerful Instant Save performance.

While Clarkson was happy to have Moorer on her team, viewers were less than pleased. Many took to social media in anger, saying it was unfair that Moorer was able to earn a spot in the Top 13 and, eventually, the Top 11, when she hadn’t been through the same process as the other contestants.

It soon became clear that viewers thought the Comeback Stage was a bad idea, and many pleaded for it not to be a part of future seasons.

Knowing how upset people were over the whole situation, Clarkson addressed it following Moorer’s performance of the song “Consequences.”

“I know the ‘Comeback’ thing is iffy with people…But here’s the thing: I’m from a competition and I would’ve chosen anything for any moment, any opportunity and any door…And I’m just super proud.”

Despite Clarkson’s efforts to change viewers’ minds about Moorer, they did not vote her through past that point in the competition.

A Show Of Continued Support

Putting action behind her words, Clarkson proved just how proud she is of Moorer when she welcomed her to the stage during a recent concert. Fans were surely stunned to see Moorer there over country singer Chevel Shepherd, who was also on Clarkson’s team and ended up winning the season.

Clarkson surprised the crowd by revealing that she and her often-criticized Voice team member would be performing a duet together. They sang Billie Eilish’s “Idontwannabeyouanymore,” and did a brilliant job at it.

Even when no one else believed in Moorer, Clarkson always did. By bringing her out on stage at her show, she made it obvious that she will always be a champion of her talent, no matter what others may say.

You can watch the coach and her former contestant duet in the clip below. We never thought we’d see these two sing together again, that’s for sure!