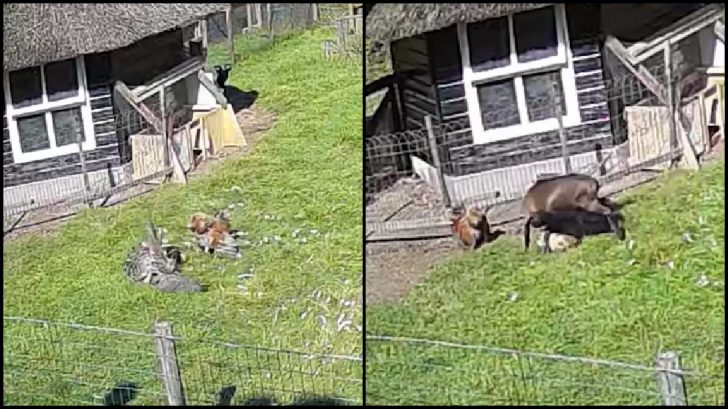 If anyone ever doubted the intelligence or bravery of farm animals, a new video released by a farmer in the Netherlands is sure to change their mind.

In the incredible footage captured by a security camera, a hen is seen grazing in its coop when a hawk dives out of the sky. The chicken tries to run away as the hawk follows, eventually grabbing the fowl with its sharp talons. The rest of the barnyard animals notice the commotion and some flee, but two brave animal souls come to the rescue of their chicken friend.

The first to approach the attacking hawk was a fearless rooster who did little to help, followed by a goat who rammed the hawk until it eventually let go of the hen. As soon as the hawk let go, the frightened chicken ran for cover.

The chicken’s owner, 59-year-old Dutch farmer Jaap, was inside his home when he heard what he described as “ear-piercing screeching” coming from outside. By the time he got to the window to see what was happening, it was over. Jaap checked his security camera and was surprised to see what had unfolded in his yard.

“I was so proud of the rooster and the goat jumping in to defend our chicken. I was also very relieved that the chicken survived,” he said. “I heard the screaming animals but it was too late to see the attacker so I checked the CCTV. It took only 17 seconds between the appearance and disappearance of the hawk.”

Jaap reported that the hen suffered only minor wounds and was back to her old self after a couple of days.

According to the farmer, this recent incident wasn’t the first time his animals had defended each other.

“In the seven years I have lived here, it’s the third attack on our chickens. This was the second from a goshawk and the other was a buzzard. In the two previous attacks the turkey and the goats saved the chickens,” Jaap said.

Watch the incredible footage of the heroic goat and rooster that saved a hen’s life in the clip below.